Turkey prefers dialogue but is committed to protecting its rights in the East Med, MGK statement says 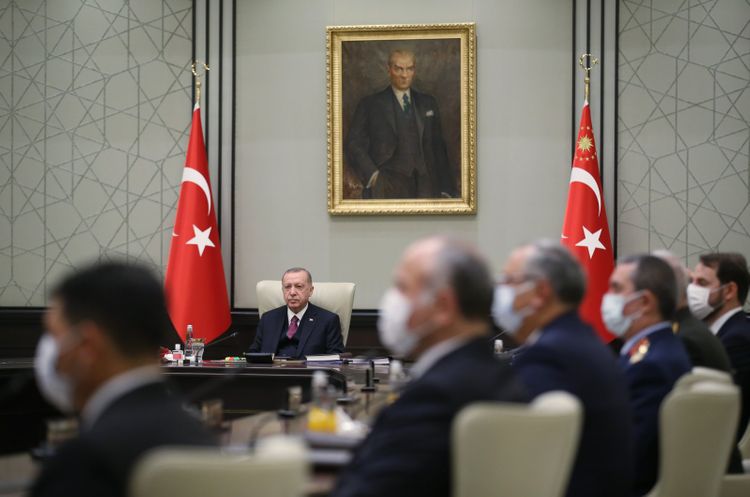 The MGK, presided over by President Recep Tayyip Erdoğan, met in Ankara and later issued a statement. "Turkey prefers dialogue in every platform about the fair distribution of natural resources in the area," the statement read.

The council also urged all countries to act with common sense and in accordance with international law, including "those who arm legally demilitarized islands," referring to Greece’s move to send troops and other military hardware to Kastellorizo (Megisti-Meis), as well as smaller islets around the area.

Turkey and Greece recently agreed to hold exploratory talks on the Eastern Mediterranean after tensions between the two countries soared following disputes over energy exploration activities in the region.

Greece has disputed Turkey's right to conduct energy exploration in the region, trying to box in Turkish maritime territory based on small islands near the Turkish coast.

Turkey – the country with the longest coastline on the Mediterranean – has sent out drillships to explore for energy on its continental shelf, saying that both Turkey and the Turkish Republic of Northern Cyprus (TRNC) have rights to the natural resources in the region.

The council also reaffirmed Turkey’s steadfast support for stability in Libya and Syria, calling on all countries and international bodies to act against "those who look to seize freedoms and resources, and their supporters."

It also reiterated that Turkey’s fight against terrorism – a permanent topic of discussion in MGK meetings – would continue.

The MGK underlined that Turkey won’t back off from its fight against terror. Saying that the country will continue to fight PKK/YPG and Daesh terrorists in Syria, the MGK said Turkey will not let the PKK find a safe haven in northern Iraq either.

The council also discussed the fight against Gülenist Terror Group (FETÖ), the group behind the failed July 2016 coup attempt, and emphasized the country’s resolve and commitment in protecting its citizens from the threats the group poses, both at home and abroad.