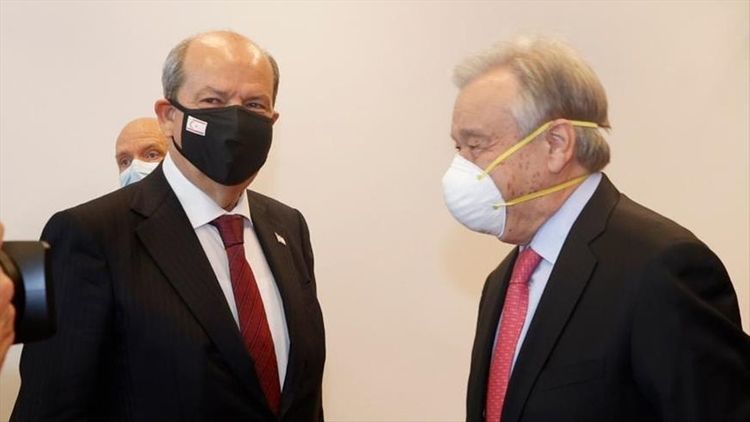 Seeking a fresher, fairer approach to the Cyprus issue, the Turkish Cypriot president has proposed establishing a cooperative relationship between the two states on the island, with both enjoying equal international status, APA reports citing Anadolu.

According to a document leaked to the media on Wednesday, Turkish Republic of Northern Cyprus (TRNC) President Ersin Tatar made his six-point proposal to UN Secretary-General Guterres for a sustainable settlement to the decades-long Cyprus dispute.

Tatar made the proposal during this week's three-day informal 5+1 gathering in Geneva hosted by Guterres, with the participation of the Turkish and Greek Cypriot leaders, and the foreign ministers of the island’s three guarantor countries – Turkey, Greece, and the UK.

"The Turkish Cypriot proposal is aimed at establishing a cooperative relationship between the two States on the island based on their inherent sovereign equality and equal international status," says the proposal.

It underlines that the Turkish Cypriot side did not come to this point overnight, "but after decades of long arduous negotiations that have ended in failure, having definitively exhausted all prospects for a bi-communal and bi-zonal federal settlement."

Tatar’s document calls for “results-oriented, time-framed” negotiations for a lasting solution after the equal status and sovereign equality of the two states on the island is secured.

UN-led negotiations will focus on the future relationship between the two states, as well as property, security, and border adjustment, and relations with the EU, according to the document.

On this new basis, and under the auspices of the UN secretary-general, “a freely reached and mutually acceptable cooperative agreement” will be established, it says.

Any agreement reached as a result of these negotiations will face a vote in separate simultaneous referenda in the two states on the island, according to the proposal.

The three-day meeting opened on Tuesday with Guterres aiming to seek "common ground" to resume formal negotiations to find a lasting solution to the decades-old dispute.