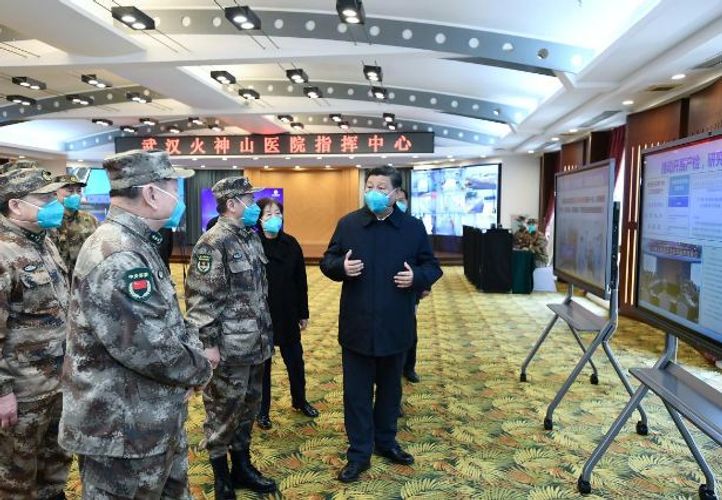 Chinese President Xi Jinping on Tuesday made his first visit to Wuhan since a coronavirus outbreak forced a lockdown of the city of 11 million people, in a sign that authorities’ efforts to control the virus are working, APA reports citing Reuters.

Xi’s arrived on the same day that Wuhan shut the last of 14 temporary hospitals that had been opened to manage a surge in coronavirus patients, news website The Paper reported..

Earlier on Tuesday, China said it had just 19 new coronavirus infections on Monday, down from 40 a day earlier. That also marked the third straight day of no new domestically transmitted cases in mainland China outside of Hubei province, where Wuhan is located, even as the disease spreads rapidly in other countries, including Italy and the United States.

“The situation of coronavirus prevention in Hubei and Wuhan has shown positive changes and achieved phased results, initially realizing goals to stabilize and turn around the situation,” the official Xinhua news service cited Xi as saying.

He acknowledged that people under lengthy quarantine - Wuhan and much of Hubei province have been under strict controls since late January - may have frustrations to vent.

“We must understand and tolerate them,” he was quoted as saying.

During his visit, a masked Xi was shown meeting with local officials, medical staff, and volunteers, state broadcaster CCTV reported. He addressed frontline medical workers and a hospitalized patient by videolink.

“It is obvious that Xi could not have visited Wuhan earlier because the risk of him contracting the virus there was initially too high,” Zhang Ming, a professor at Renmin University in Beijing, told Reuters.

“He is there now to reap the harvest. His being there means the CCP (Chinese Communist Party) may declare victory against the virus soon,” Zhang said.

China came in for criticism at home and globally over its early response to the outbreak, suppressing information and downplaying its risks, but its draconian efforts at control, including the lock-down of Wuhan and Hubei province, have been effective at curbing the spread.

Xi, who was mostly absent from Chinese state media coverage of the crisis in its early days, has become far more visible in recent weeks.

Residents of Wuhan were shown cheering Xi from their apartment windows, while negative comments on China’s heavily censored social media were quickly removed.

“Why only come now when the epidemic is almost over?” one comment on the official People’s Daily’s Weibo feed said before disappearing.

News of Xi's Wuhan visit gave a lift to Chinese stocks, with the blue-chip index .CSI300 ending the day 2.1% higher after falling into negative territory in morning trade.