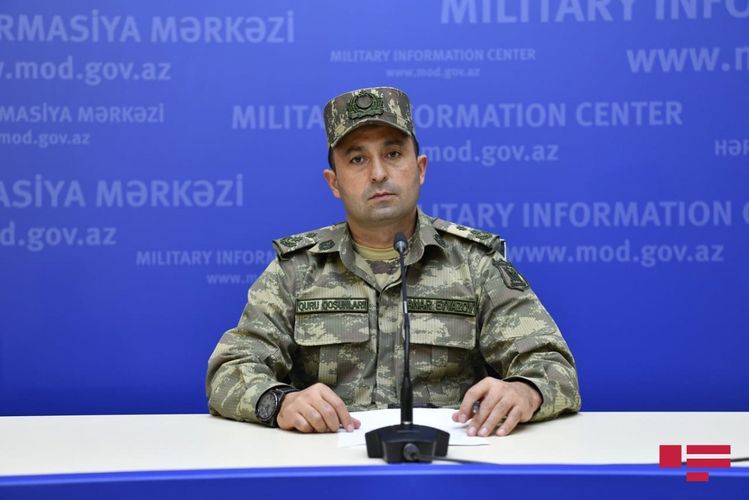 "Determined counter-attack operations, conducted by Azerbaijani Army, for the sake of liberation of occupied territories from enemy, are underway. Battle determination and moral-psychological condition of personnel of our Army are high, our military servicemen, participating in battles, demonstrate real heroism. As a result of battles, conducted by the Azerbaijani Army, many live forces, military objects, and battle equipment of the Armenian troops have been destroyed in different directions of frontline", said Press Secretary of Press Service of the Ministry of Defense, Lieutenant-Colonel Anar Eyvazov at today's briefing, APA reports.

Eyvazov noted that in the morning the territory of the Dashkesan region of Azerbaijan is subjected to artillery fire from the territory of the Vardenis region of Armenia. Adequate retaliatory actions will be taken by the Azerbaijani Army in this regard. Despite the Armenian Armed Forces attempted to counter-attack several times in order to return back their lost positions in the direction of Fuzuli-Jabrayil and Aghdara-Tartar of front, the units of the Azerbaijani Army located in these directions have been successfully defended and immediately prevented all attempts by the enemy.

“Artillery units of the Armenian armed forces located in the direction of Aghdara, which fired on our settlements were shelled.  As a result of accurate artillery fire,  enemy units, which suffered heavy losses, was forced to withdraw from their firing positions.

According to A. Eyvazov, the enemy’s mixed convoy consisting of armor-plated and automobile equipment moving from Madagiz and the artillery squadron providing fire support for their movement was destroyed by aviation means of Azerbaijan’s Air Forces and our troops stationed on this site of the front line during the night battles on the site of Agdere region of the front line: “1 tank, 1 automobile equipment and up to 10 members of military personnel of the enemy intending to perform relocation in the morning hours on Fuzuli-Jabrail site of the front line were destroyed by artillery strike.

At about 07.00-08.00 in the morning, 4 more tanks of the Armenian troops were destroyed by our heroic soldiers on the Fuzuli-Jabrail site of the front line.

A few minutes before, units of the Azerbaijani army destroyed an Uragan multiple launch rocket system of the Armenian armed forces in the direction of Khojavand (Martuni).

As a result of the strikes by the Azerbaijani army, the 3rd Martuni motorized rifle regiment of the Armenian armed forces, stationed in Khojavand region, was destroyed. As a result, the Armenian side suffered heavy losses, the regiment was completely defeated.  Armenian army appealed to everyone with a request to deliver vehicles for the evacuation of the dead and wounded.

Armenia's military propaganda machine, which is in a desperate situation after a series of successful military operations of the Azerbaijan Army, has launched a large-scale provocation in the information space.

I would like to note that starting from the morning hours, the Azerbaijan Army’s offensive operation to liberate Fizuli city continues successfully.