Azerbaijan Defense Minister demands to be ready for hostilities 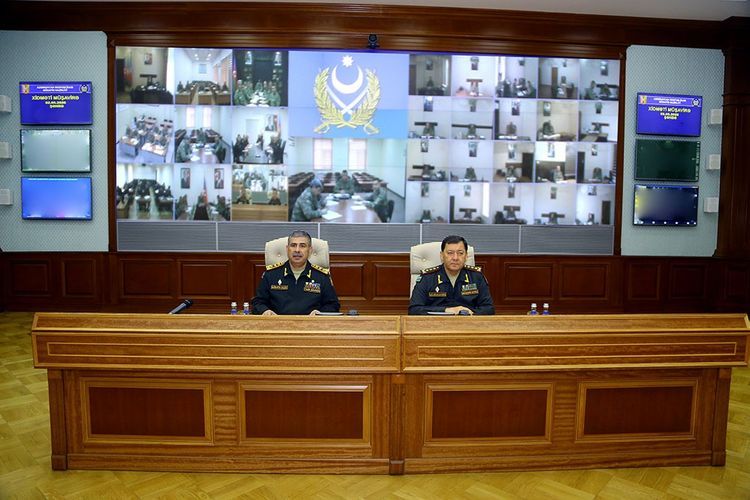 The Minister of Defense, Colonel General Zakir Hasanov held an official meeting with the command staff of the Azerbaijan Army on May 2 at the Central Command Post, the Ministry of Defense of Azerbaijan told APA.

First, memories of national leader of the Azerbaijani people Heydar Aliyev and shahids who died for the independence and territorial integrity of the country were honored with a minute of silence.

In his speech, the Minister of Defense emphasized that the mass spread of coronavirus infection in our country was prevented thanks to the timely and effective instructions of the President of the Republic of Azerbaijan, Mr. Ilham Aliyev. He stressed that as a result of preventive measures taken, there are no cases of coronavirus infection were recorded among military and civilian personnel of the Azerbaijan Army.

The Minister of Defense focused the attention of the army leadership on the fact that recently, due to the enhanced enemy provocative actions, the possibility of renewed hostilities has increased dramatically. The Minister of Defense gave specific instructions to strengthen all types of reconnaissance at the front line and in the depths of the enemy’s defense, to clarify plans for combat readiness, to provide comprehensive support to troops, and to check the readiness of military personnel to conduct intensive classes, training, and exercises.

The Minister of Defense demanded that commanders of all levels must be ready to suppress various provocations, decisively prevent the enemy from activating in all directions of the front, as well as be prepared for the conduct of hostilities.

At the end of the meeting, the Minister of Defense gave relevant instructions on transferring weapons, military and specialized equipment to the summer operation mode, switching to the summer uniform of military personnel, strengthening medical control over the health status of servicemen, and ensuring their safety.