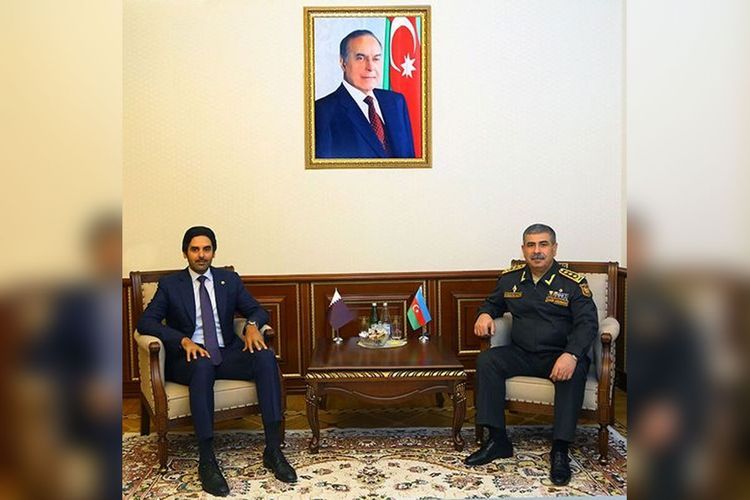 Minister of Defense of the Republic of Azerbaijan, Colonel General Zakir Hasanov has met with the newly appointed Ambassador Extraordinary and Plenipotentiary of the State of Qatar to Azerbaijan Faisal bin Abdullah Hamad Abdullah Al Henzab, the Ministry told APA.Minister of Defense congratulated the Ambassador on the beginning of diplomatic activity in our country and wished him success in the field of expansion of cooperation between Azerbaijan and Qatar.Colonel General Z. Hasanov highlighted the efforts of leaders of the two countries in the development of the Azerbaijani-Qatari relations and noted the successful development of relations in the military sphere.The parties, noting the great potential for cooperation in the military field, expressed interest in developing this cooperation. The importance of mutual visits of servicemen, as well as the holding of Azerbaijani-Turkish-Qatari joint military exercises in terms of the development of military relations, was noted.Diplomat, in his turn, expressed his satisfaction with the beginning of activities in a friendly and fraternal Azerbaijan as an Ambassador and stressed that he would make every effort in the development of relations between the countries, in particular, cooperation in the military sphere.The ambassador stressed that Qatar recognizes the territorial integrity of our country, and always supports the rightful cause of Azerbaijan within the framework of international organizations and events.During the meeting, the prospects of military cooperation, regional security, Armenia-Azerbaijan Nagorno-Karabakh conflict and other issues of mutual interest were discussed.