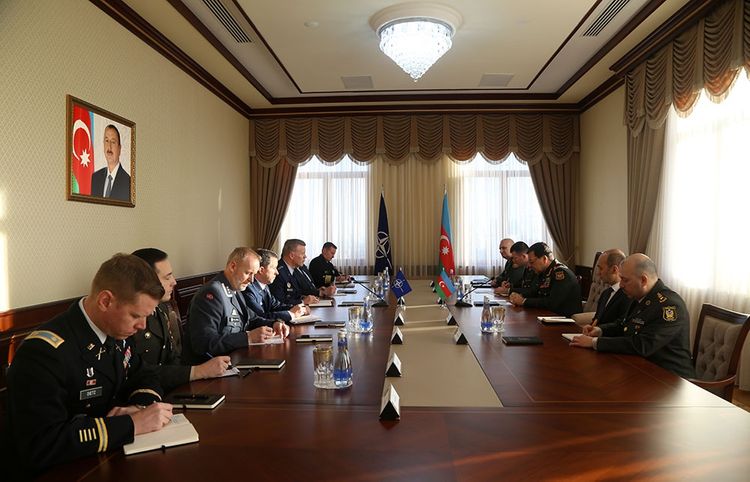 On February 6, First Deputy Minister of Defense of the Republic of Azerbaijan – Chief of the General Staff of the Armed Forces, Colonel General Najmeddin Sadikov has met with the delegation led by the Supreme Allied Commander Europe (SACEUR), Commander of U.S. European Command, General Tod Wolters, Ministry of Defence told APA.Colonel General N. Sadikov welcoming the guest recalled the meeting held in Baku last July and noted the development of relations between our country and NATO over the course of 26 years, the activities of the Azerbaijan Army in various programs and the contribution made by our servicemen to the NATO-led Resolute Support Mission in Afghanistan.The Chief of the General Staff emphasized that the main goal of Azerbaijan-NATO cooperation carried out in various fields is to eliminate instability, conflicts, and threats in the Euro-Atlantic area, as well as in the establishment of indivisible security system in a worldwide scale.Touching upon the military-political situation in the region, Colonel General N. Sadikov, recalling that Armenia occupies 20 percent of the territory of Azerbaijan that is recognized by the international community, and that the negotiation process remains to be ineffectual so far. He emphasized that the solution to this issue is to compel Armenia to fulfill the requirements of the relevant resolutions of the UN Security Council on the basis of the norms and principles of international law.The Chief of the General Staff highly appreciated NATO's position on the supporting territorial integrity and sovereignty of Azerbaijan and expressed confidence that the Alliance will continue its efforts in this issue.General T. Wolters in turn, especially noting that Azerbaijan is a reliable partner of Alliance, highly appreciated the participation of our country in the fight against terrorism, the significant contribution in providing airspace to cargo transportation for peacekeeping operations, including the high level of professionalism of Azerbaijani peacekeepers in Afghanistan.General T. Wolters stressed that the Alliance is in favor of a peaceful solution to the Armenia-Azerbaijan Nagorno-Karabakh conflict.The guest has expressed gratitude to the leadership of Azerbaijan for the warm welcome and hospitality, as well as for its assistance in holding the next meeting with the Chief of the General Staff of the Armed Forces of the Russian Federation in Baku.During the meeting, the parties also exchanged views on other issues of mutual interest.