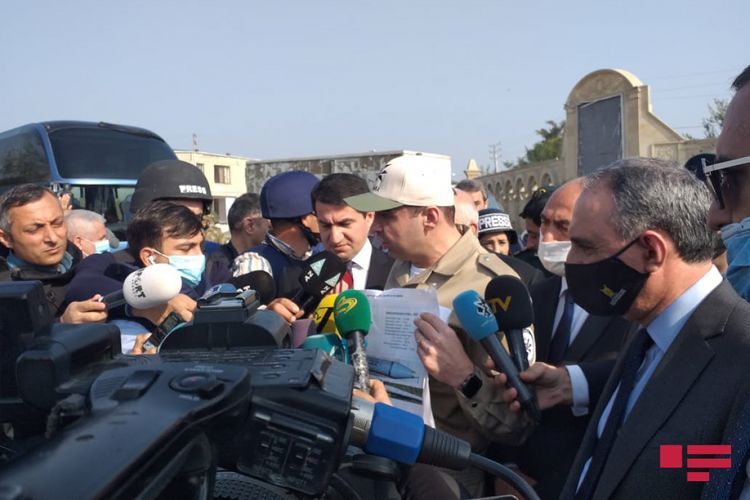 “Azerbaijan has the right to self-defense. Based on clause 54 of the UN Statutes, Azerbaijan retains the right to take retaliatory measures against legitimate military targets in order to ensure Azerbaijan’s security. But this is the purpose of Azerbaijan, we don’t and won’t ever wage fight with civilians”, said Assistant to the President of the Republic of Azerbaijan - Head of the Foreign Policy Department of the Presidential Administration of the Republic of Azerbaijan Hikmat Hajiyev in his statement to local and foreign press when attending together with representatives of the diplomatic corps the territories destructed by rocket strikes inflicted by Armenians yesterday on Barda City, APA’s local correspondent reports.

The Presidential aide said if they think they can thereby break the commitment of the Azerbaijani people, they are mistaken: “We will also head to Terter after this, if they want to shoot, then let them shoot. But they will never be able to break commitment of the Azerbaijani people. Our lands will be liberated from occupation. In one word, if they are men, then they should come into battlefield. They are fleeing battlefield meanly, infamously, they have only power enough to defeat women and children by launching rocket. And Azerbaijan’s Armed Forces retaliate this worthily on battlefield. As our Supreme Commander-in-Chief has said, we are chasing them away as dogs and will also chase them away from now on. They are punished on the battlefield one by one. Azerbaijan’s Armed Forces retaliate most perpetrators of Khojaly genocide on battlefield. There is already the information in the press as well saying the defense minister of the so-called regime has also been sent to hell. Others will also have their whack of punishment. As the Supreme Commander-in-Chief has said, we will chase all of them away as dog”.