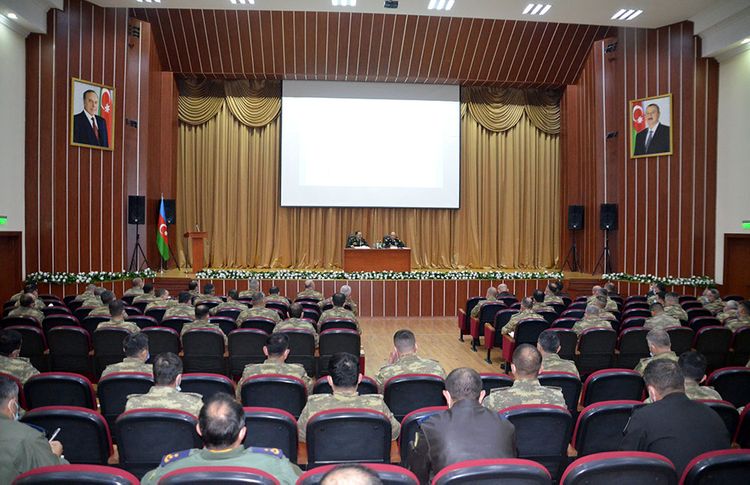 Under the instructions of the Minister of Defense, Colonel General Zakir Hasanov, training-methodological sessions on the results of the first quarter of the 2021 year were held at the Training and Educational Center of the Armed Forces, The Ministry of Defense told APA.

The training-methodological sessions were attended by the deputy commanders of the Army Corps, formations, branches of troops, independent units, and deputy chiefs of special military-educational institutions for ideological work and moral-psychological support.
First, the memory of the national leader of the Azerbaijani people Heydar Aliyev and the Shehids (Martyrs) who sacrificed their lives for the territorial integrity of the country was honored with observing a minute of silence. The combat path and experience of the servicemen who showed heroism, steadfastness, and self-sacrifice in the Patriotic War were especially emphasized.
Speaking at the sessions, Deputy Chief of the Department for Ideological Work and Moral-Psychological Support of the Main Department for Personnel of the Ministry of Defense, Colonel Aydin Eyyubov noted the successful fulfillment of the tasks assigned to the Azerbaijan Army. He informed the participants of the sessions about the work carried out in the sphere of military-patriotic education and moral-psychological training based on the ideology of Azerbaijanism, in particular increasing military discipline and other areas, as well as about the forthcoming tasks. He also brought to the attention of the event participants the instructions of the Minister of Defense on the upcoming work in the relevant field.
Deputy Chief of the Legal Department of the Ministry of Defense, Colonel Vugar Isayev informed the sessions participants in detail about the law on the status of servicemen and the requirements of legislation in the field of social protection of servicemen.
Speaking at the session, Honored Art Worker of Azerbaijan, an individual pensioner of the President of Azerbaijan, Abdulla Gurbani, noted the invaluable merits of the units’ deputy commanders for ideological work and moral-psychological support in instilling a sense of patriotism in the servicemen of the Azerbaijan Army, increasing fighting spirit and striving for victory during the Patriotic War.
At the sessions, an exchange of views took place on several issues related to the combat and moral-psychological training of military personnel of our army.