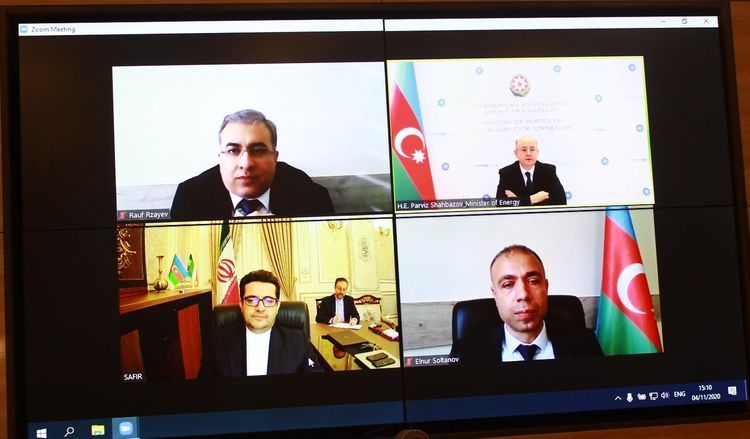 A meeting in the videoconference format has been held between Azerbaijan’s Energy minister Parviz Shahbazov and extraordinary and plenipotentiary ambassador of the Islamic Republic of Iran to Azerbaijan Seyyed Abbas Mousavi, the Energy Ministry told APA-Economics.

The issues of bilateral cooperation between Azerbaijan and Iran in the area of energy were discussed at the meeting. The minister congratulated the ambassador on occasion of his entry upon diplomatic activity in our country, wished him successes. Then the information was provided to the ambassador about Armenia’s last military provocations and the counteroffensive operations conducted by Azerbaijan on its own territory. It was stated that as a result of the attacks of the Armenian armed forces on Azerbaijan’s cities and villages by means of heavy artillery and rocket launchers, 91 civilians were killed, over 400 people were wounded since September 27 to the present day.

Based on the information, the ambassador extended his condolence to the Azerbaijani people, to martyrs’ families and relatives on occasion of killing of the people in Ganja, Barda, Terter cities, as well as other regions beyond the conflict zone as a result of Armenia’s military provocations.

The ambassador saying his country’s official stance remains unchanged, noted the importance of solution of the conflict within Azerbaijan’s territorial integrity and sovereignty. At the same time, he conveyed his congratulations on occasion of liberation by the Azerbaijani army of Azerbaijan’s occupied lands from occupation.

P. Shahbazov voiced his ideas about the projects implemented currently together with Iran, its implementation status and the completed works, expressed his confidence that Seyyed Abbas Mousavi will contribute to the successful cooperation that have been continued for many years.

The present condition of cooperation with Iran in the area of oil and gas, electric energy production, the implementation of the joint projects and other issues were discussed at the meeting.