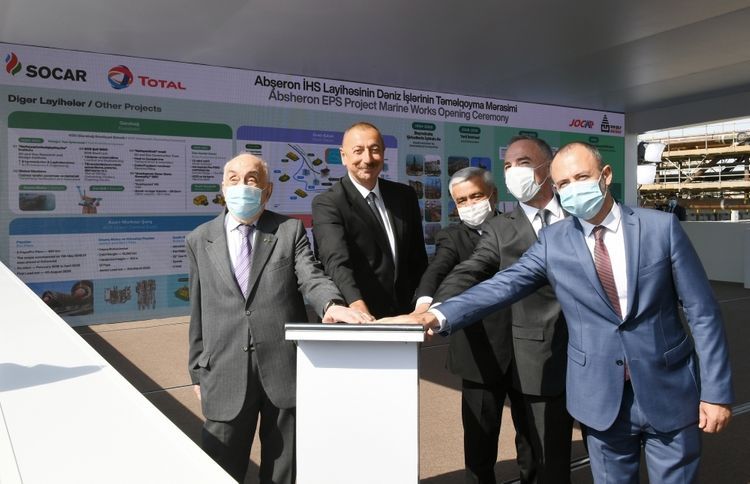 As reported earlier, on September 19, President of the Republic of Azerbaijan Ilham Aliyev attended a groundbreaking ceremony for the Absheron field offshore operations at the Heydar Aliyev Baku Deep Water Jackets Plant.

After the ceremony, the head of state gave an interview to Azerbaijan Television, Public Television and Real Television.

APA  is publishing some excerpts from the interview of President Ilham Aliyev:

“This is a very important event indeed because a new stage is actually beginning for the Absheron gas condensate field. I am confident that this stage will be successful too, and thus Azerbaijan will make an important step in its oil and gas strategy.”

“The history of the Absheron field is somewhat different because the first contract on the Absheron gas field was signed with foreign partners in the late 1990s. I remember those days quite vividly because we had high hopes for the Absheron field. Our geologists, especially Khoshbakht Yusifzade, were convinced that there were fairly large gas reserves in this field... Unfortunately, after some time the first contract was terminated. The reason was that the exploration well came out dry. I remember our prominent geologist Khoshbakht Yusifzade saying at the time that the location of the well was not chosen correctly and trying to persuade foreign partners to make some adjustments to their work program. Unfortunately, they did not listen to him.”

“But let me say again that we had full confidence that there are huge gas reserves here. I am glad that “Total” came to the same conclusion and relevant documents were signed with SOCAR. Then specific work was done and a large gas condensate field was discovered. I can say that the news about the discovery of the field, about this important event was shared with me Khoshbakht Yusifzade. So a great resource has been obtained for the development of our oil and gas potential.”

“This field has gas reserves of 350-360 billion cubic meters. But I believe there will be even more. Our experience already shows that there are more resources than expected and 100 million tons of condensate. This is a product equal to crude oil, and thus Azerbaijan will continue to be a reliable supplier of gas. I must also say that the gas produced from “Absheron” at the first stage will be directed to domestic needs because there is a need for that. The growing population and the growing industry require that. The gas to be extracted at the second stage will be exported to world markets. The full-field development of this field will be solved in stages.”