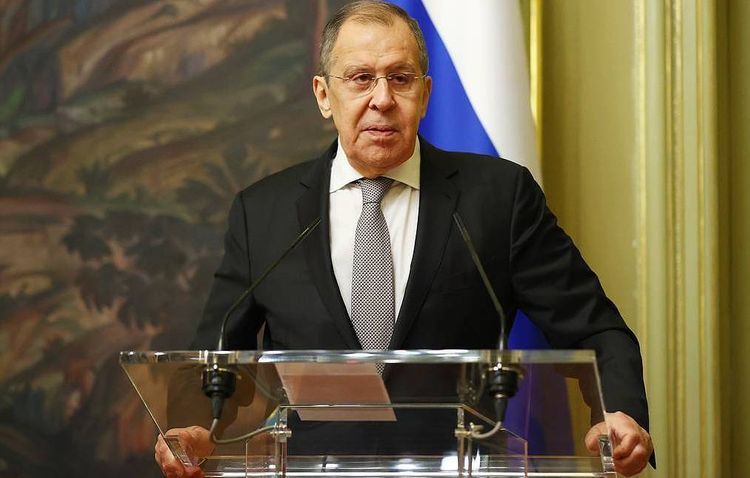 The European Union sacrifices its own geo-economic and strategic interests for the sake of immediate wishes in order not to lag behind Washington in the attempts to "punish Russia," Russian Foreign Minister Sergey Lavrov said in an interview with "Moscow. Kremlin. Putin" program on Rossiya-1 TV channel, APA reports.

"Unfortunately, the EU has chosen the path of sacrificing its own geo-political and strategic interests for the sake of immediate wishes not to lag behind the US in what is called "punishing Russia." We have got accustomed to this," Lavrov said.

Lavrov stressed that if the EU keeps sticking to its negative and destructive stance, Russia must not depend on its whims and should ensure its own development itself and in partnership with those who are ready for cooperation on an equal and mutually respecting basis.

Speaking on Russia’s possible response to the new Western sanctions, the top diplomat noted that Moscow would not leave these steps unanswered stressing that "no one abandoned the principle of reciprocity in international affairs."

"We will see what these new sanctions will be. We will certainly respond. This cannot be left without a response. First, this is wrong from the viewpoint of diplomacy laws. Second, we want to limit negative influence of various Western structures - the states and numerous so-called NGOs," he said.

Lavrov noted that Russia has learnt from the story with Western sanctions, which had begun long before the Ukrainian events and the Crimean referendum. "The administration [of former US president] Barack Obama launched this process after Edward Snowden turned out to be on our soil because he had been prosecuted - yes, he probably violated US laws, but he revealed an absolutely illegal and illegitimate criminal activity of US structures, which sought to promote unacceptable approaches in various foreign countries and undermine legitimate governments," the minister explained.

According to Lavrov, since then Russia has got accustomed to sanctions. "And what is called import replacement is probably a narrow explanation of how we are responding to all this," he added.

"The principal geopolitical response is that during all these years we understood that our Western partners, including the EU members, regrettably, are unreliable. We had a lot of far-reaching plans," Lavrov said. "We have respective documents on how to further develop relations with the EU in the fields of energy, high technologies and economic cooperation in general."

Meanwhile, the foreign minister noted that Russia and the EU are in one geopolitical space. "Our common geography, logistics, infrastructure on the Eurasian continent certainly give us a very serious competitive advantage," Lavrov stressed.

"If we and the EU as well as other countries located here, including the SCO, the EAEU and ASEAN countries, which are very near, fail to use competitive advantages in geopolitical and geo-economic rivalry, which is now exacerbating, certainly, this will be a major mistake," Lavrov said.