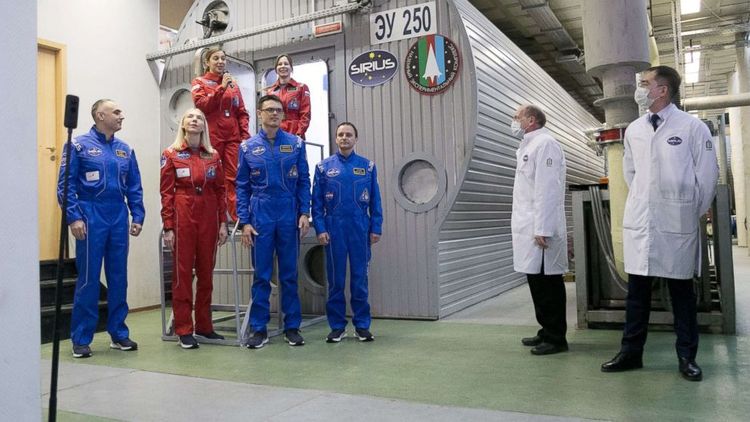 A two-week isolation experiment simulating a flight to the Moon aboard an Orlyonok spacecraft came to an end on the premises of the Institute of Biomedical Problems in Moscow, Institute Department Head Mark Belakovsky told TASS on Friday, APA reports citing TASS.

"At 11:30, the crew left the lander module. The crew’s commander delivered a report to the project’s head. The program of scientific, technical and operational studies has been implemented in full and the crew is feeling well," he said.

During the day on April 30, the six crewmembers will undergo biomedical examination and go home in the evening, Belakovsky specified.

The two-week isolation experiment Eskiz kicked off on the premises of the Institute of Biomedical Problems on April 16 when the crew of six volunteers entered the ground-based compound. As its specific feature, the experiment provided little living space of about 8-12 meters for six individuals. The space was outfitted with sleeping places, several workplaces with a large amount of scientific equipment and a lavatory.

Over the two weeks, the crew notionally traveled to the Moon, made a spacewalk on the lunar surface and got back. The extra-vehicular activity was simulated using virtual reality means. The isolation experiment aimed to study the early period of adapting to complex conditions. Specialists examined how the crew interacted within quite cramped space and how much this factor had its impact on the crewmembers’ psycho-emotional status.

The Eskiz project is being financed through the Education and Science Ministry’s project of the Pavlov Center for Integrative Physiology for Medicine, Hi-Tech Healthcare and Stress Resilience Technologies, and also through the project of the Russian Science Foundation.