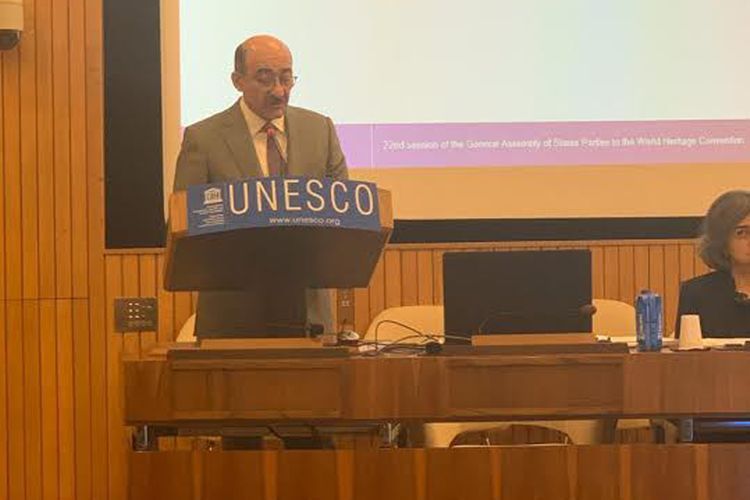 Minister of Culture of Azerbaijan Abulfas Garayev who is on a visit to Paris has attended the 22nd session of the General Assembly of States Parties of UNESCO on Protection of the World Cultural and Natural Heritage, APA reports.

Minister Abulfas Garayev, as chairman of the World Heritage Committee of UNESCO, has presented a report on the work carried out during 2018-2019 and the decisions made at the 43rd session of the Committee.

The Minister noted that, in total, 2000 people have participated, 53 parallel events have been organized by various countries and organizations, and 29 new sites have been included in the World Heritage List in the 43rd session of the Committee held in Baku. Informing about World Heritage Young Professionals Forum and World Heritage Site Managers Forum, organized prior to the session, the Minister noted several important outcomes of these Forums. Abulfas Garayev touched upon the opening ceremony of the event, held on June 30, and stated the event will be remembered with speeches of Director-General of the UNESCO Mrs. Audrey Azoulay, First Vice-President of the Republic of Azerbaijan, UNESCO’s Goodwill Ambassador Mrs. Mehriban Aliyeva, and other high-ranking officials. He stated that the Baku Declaration on the protection of cultural and natural heritage has been adopted at the end of the session and an article on Africa and sustainable development have been included in the agenda of the session for the first time.

The minister also talked about the implemented activities and achievements during the chairmanship to the Committee and  Ad Hoc Working group.

Armenian delegation, as usual,  has committed a provocation at the meeting. The delegation stated that the participation in the sessions of the Committee held in Baku was not possible because security conditions for Armenian delegation had not been provided.  Azerbaijani delegation stated in a response to the traditional Armenian provocation that, the holding of 43rd session of the Committee in our country has regulated with the set of agreements and commitments signed between UNESCO and Azerbaijani government and within this frame, Azerbaijan has ensured the same terms and conditions for all member countries of UNESCO and partner organizations.