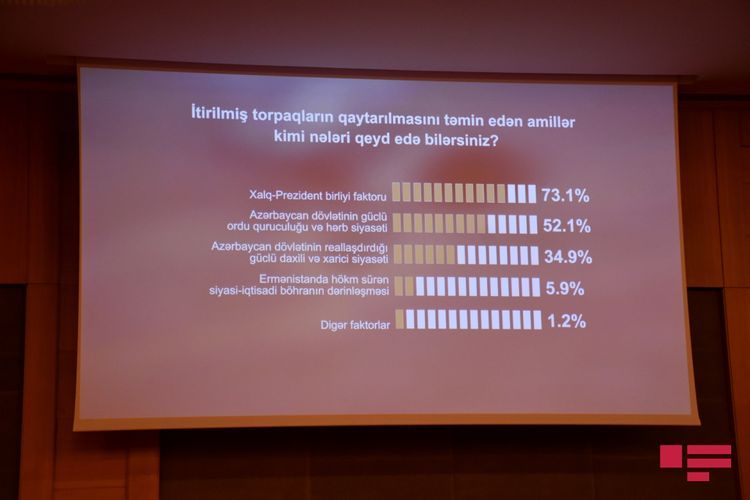 Today, the briefing was held regarding initial analysis of results of survey of Social Researches Center (SRC) entitled as “The Second Garabagh War in the public opinion”, APA reports.

Two different periods – August 24 – September 10 and September 28 – September 30 were covered in the survey.
Chairman of Management Board of SRC Zahid Oruj said the Azerbaijani Army liberated from occupation some our territories. Z. Oruj congratulating the Supreme Commander-in-Chief, the Azerbaijani people on this occasion said Azerbaijanis in all parts of the world are waiting for the news of liberation of our lands from occupation: “While the obtained results reflected position and expectations of the Azerbaijani society regarding potential martial law on the eve of Tovuz battles of 12th July in the first phase, the second phase consisted of study of public attitude to the Second Garabagh War waged under leadership of the Supreme Commander-in-Chief and level of solidarity. The survey results show that the Azerbaijani people defend the Supreme Commander-in-Chief. The First Garabagh War ended, but the war continues. The survey encompassed 2758 people. The people were firstly asked to what extent the Azerbaijani people and state are ready for war. Over 94 percent of our people think that our people and our state are ready for war. The second question was associated with assessment of our Army’s force by our people. 98 percent said the confidence in Army’s power is high. 93 percent noted that the fight waged under leadership of the President, the Supreme Commander-in-Chief for liberation of our lands from occupation will end successfully. The people associated this with both the army building and the correct evaluation of geopolitical environment. The April battles, Gunnut victory and Tovuz battles, as well as the foreign military cooperation were noted in this aspect. 89,6 percent believe in liberation of Garabagh and surrounding regions”.

Z. Oruj stressed that Azerbaijan pursued right policy during past decades: “70% said that President-Nation unity plays a main role in the achieved success. We addressed people a question on security on the case of war during the period of survey, covering until September 27. 50% of people noted that we will be in safe condition on the case of a war, while 20% said we can face certain difficulties. It was clear that Armenia was expected to shell civilian facilities, residential settlements. As for activity of OSCE Minsk Group Co-Chairs, 81.8% of participants of the survey expressed their negative attitude to the activity of Co-Chairs. We asked which countries will help Azerbaijan, if Azerbaijan starts a war. 99.8% of people noted Turkey will help us. 98% noted Pakistan will provide moral-political support to Azerbaijan, while 93% - Ukraine, 87% - Israel, 71% - Georgia, more than 70% - Belarus. As for attitude of the participants of the survey on OSCE Minsk Group Co-Chairs and Iran, we do not announce it, have presented it to President.”

Head of Social Research Center Board has drawn attention to the funerals of martyrs: “98% have supported decision of the Supreme Commander-in-Chief on counter-attack operation. These researches prove that prestige of the President of Azerbaijan is high among people. It is a war, conducted by nation, there is not a discrimination for political, social affiliation. Finally, nation believes in victory. We will present other parts of the research later. I think opinions, expressed in the letters addressed to the head of state in such fateful days, have also confirmed in our social query. Armenia has wanted ruin of relations between President, nation, and Army.” 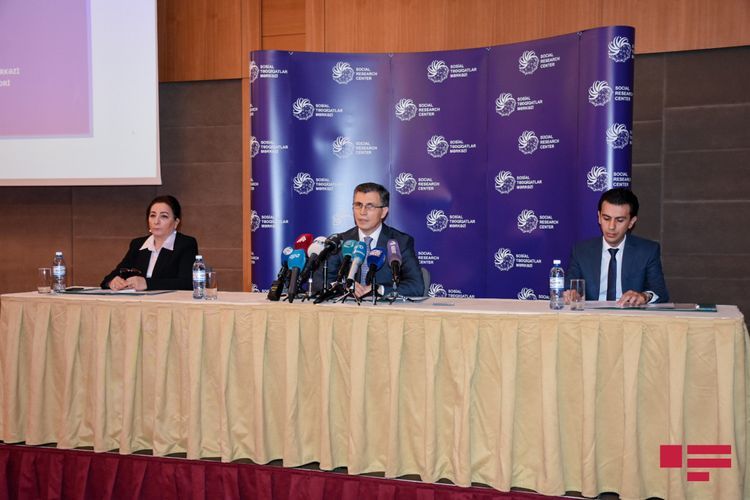 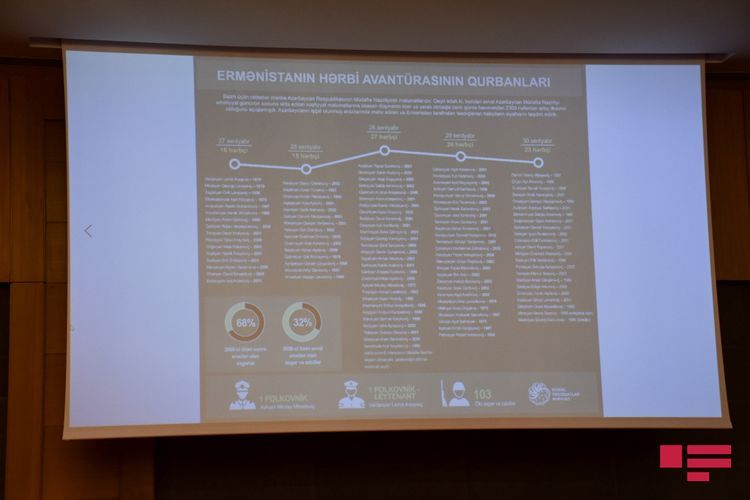 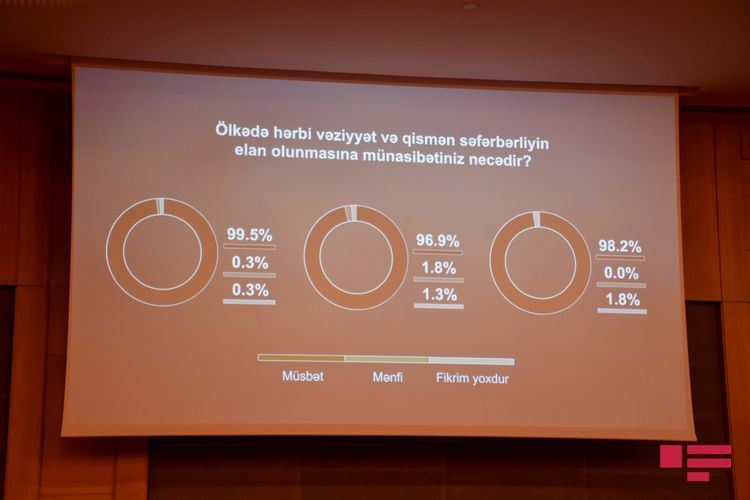