Azerbaijani President: “Both on battlefield and at negotiating table we could achieve what we want” 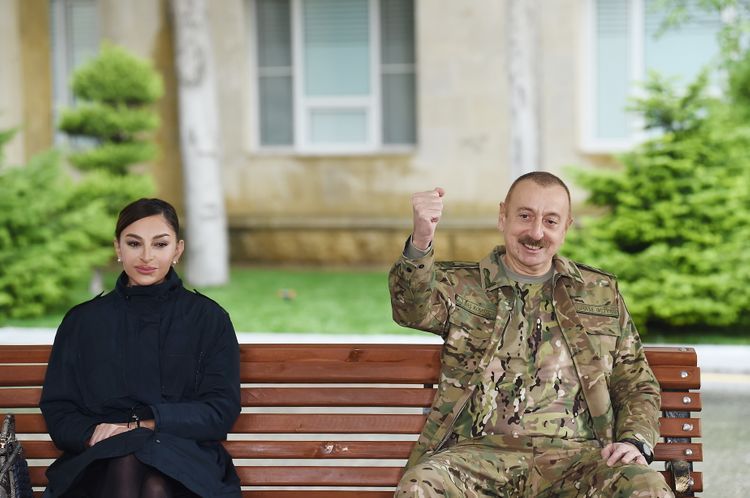 “This victory will remain forever in the history of Azerbaijan. Both on the battlefield and at the negotiating table we could achieve what we want. We could liberate Fuzuli, Jabrayil, Zangilan, Gubadli, Shusha cities by military force. We have planted our flag in those lands, we have waived our flag. Today, all of the world saw that what Azerbaijan’s strength is. Thanks to the professionalism of our servicemen, both in the political field and in the field of military construction, we have gained an advantage from the first days of the war and have consistently advanced to this last goal,” said President of the Republic of Azerbaijan, Victorious Supreme Commander-in-Chief of the Armed Forces Ilham Aliyev at a meeting with servicemen being treated at the Clinical Medical Center No. 1, APA reports.

The President said that battles were fierce and the enemy was resisting: “Let everyone know that the victory achieved during these 44 days has been achieved thanks to professionalism, heroism of our servicemen. The enemy did not want to leave the occupied territories voluntarily and you- the people who attended these battles know very well that what fortifications they had built during 30 years. It demanded great heroism and military professionalism to break through those fortifications, to repel those lines of defence. Also, the geography of that region is a fortification in itself. Shusha is a city considered an impregnable castle. Panakali khan built that city in a such way that to be able to protect residents of Shusha from enemy maximally. It is a symbol of great professionalism and courage to liberate Shusha in a few days with minimal losses and without inflicting great damage to the city. The enemy conducted preparation works in these lands during 30 years. These preparation works show that they did not want to leave our lands voluntarily. If it wanted, why did it spend so much money on these issues? This shows that during all this period- during nearly 30 years the enemy just deceived us, deceived mediators that they will withdraw from our lands. It was a lie and the scene on the battlefield confirms it.

At the same time, scene of territories, liberated from occupation, showed that the enemy lived with the feeling of hatred against Azerbaijani people, otherwise, why was destruction of all buildings needed? All buildings in almost 99% of our territories, liberated from occupation, were destructed – residential buildings, schools, hospitals, public buildings, historical monuments, graves of our ancestors, our mosques. Now we release these video footages, all can see it on media.”

Head of state noted that it is brutality, vandalism, it is a military crime: “The enemy committed a military crime and an instruction has already been given that caused damage, its accounting should be provided. Groups have already been mobilized, international experts will be invited. Material and moral damage of all destruction will be calculated with participation of international experts and we will sue the enemy to international courts in the forms of both individual and organized form, they will pay compensation, respond for their ugly deeds and they answer.”