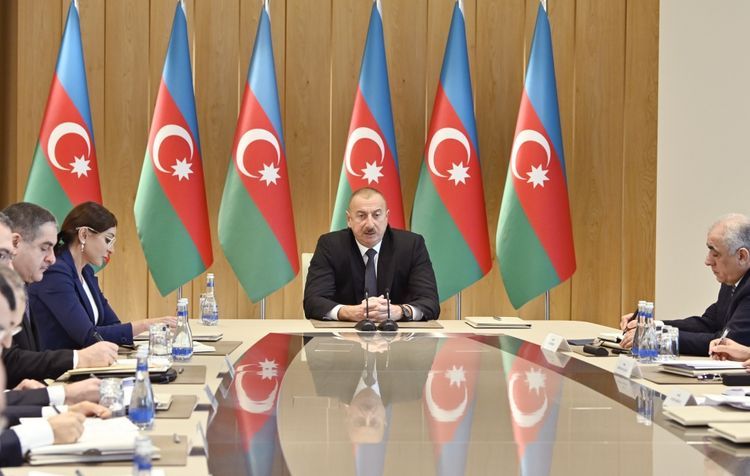 "Very positive results were achieved in the economic sphere last year. They testify to the fact that we are pursuing a sound policy. I believe that Azerbaijan successfully met all the goals in the economic sphere in 2019. It would be sufficient to look at the figures to see that 2019 was a successful year for our country in terms of economic development. The World Bank included Azerbaijan in the list of 20 most reforming countries. This is a great achievement, which testifies to the fact that the fundamental reforms our country has carried out are approved by leading international institutions. I can say that, in general, 2019 was a year of deep reforms – political, economic, social, as well as personnel and structural transformation," President of the Republic of Azerbaijan Ilham Aliyev said during his opening speech at the meeting on the results of 2019, APA reports.

Mr President Ilham Aliyev emphasized that these reforms will enable our development to be even more successful in the future. This includes economic growth, which will increase even more."I believe that the results achieved in the economic sphere last year are satisfactory. Thus, the gross domestic product grew by 2.2 percent. This is a good result, especially considering that this growth in the non-oil sector is 3.5 percent. Industrial production has increased by 1.5 percent, while in the non-oil sector industrial production grew by 14 percent. This is a manifestation of the work done in the field of industry in recent years. Industrial production in Azerbaijan has grown both at the expense of public funds and as a result of private sector activity. I am sure that this growth will continue to be sustainable.

Our foreign exchange reserves have increased by $6.4 billion to reach a record high of $51 billion. I should note that Azerbaijan holds first place in the CIS space in terms of foreign exchange reserves per capita. The foreign trade surplus is $6 billion, which is an excellent result. I can say that there is a negative balance in the foreign trade of the vast majority of the countries around the world, but it is positive in our country. This, of course, will contribute to both maintaining the manat rate at a stable level and lead to macroeconomic stability in general. So the results and figures achieved in the economic sphere once again confirm that our policy is carefully thought-out and aimed at the result.

As a result of the reforms carried out by tax and customs authorities, more than 1 billion manats entered the treasury in excess of the plan. This, in turn, allowed us the opportunity to initiate a very large social package for the population, and we did it. I believe that this is the largest social package in the history of modern Azerbaijan and the CIS so far. This is not our first initiative in this area. We remember that when repaying the deposits that were left over from the Soviet era and were in some way frozen, we also returned these deposits on the basis of the principle most acceptable to our citizens and with the most acceptable coefficient, thus becoming first in the CIS in this area as well. The social package implemented last year covered 4.2 million people and the material situation of our people improved. The minimum wage has been doubled, the minimum pension has been increased by 70 percent, some benefits by 50 percent, some have been doubled. In other words, we channeled the additional income received as a result of the reforms carried out last year primarily into the social sphere. I announced this at the beginning of last year and said that all the accumulated additional funds would be spent on the social sphere, which we did. As always, we keep our word. The positive developments taking place in the social sphere and the improving well-being of our citizens remain a priority for us.

Of course, as a result of the successful economic policy, a lot of work was done in relation to social infrastructure. Sixty medical institutions and 84 schools have been built and renovated. Fifty schools are of modular type. They have been built in small and remote villages. This shows that the processes taking place throughout our country stem from the overall development potential.

Infrastructure projects have been implemented. In the field of electricity, the “Shimal-2” power station has been commissioned. The capacity of this station is 400 megawatts. In parallel, as a result of the repair and restoration carried out at the Mingachevir Thermal Power Plant and other operating stations, we have restored about 400 megawatts of lost generating capacity. Thus, we received an additional 800 megawatts of generating capacity last year. Of course, this fully meets our needs. At the same time, we have great export opportunities. We currently have 1,000 megawatts of generating capacity in excess of our needs. If we take into account the measures taken to renew the electricity infrastructure, we can say that very serious work has been done in this direction.

Gas supply in our country has reached 96 percent. A total of 345 sub-artesian wells drilled will improve water supply of hundreds of villages. I must also say that more than 400 sub-artesian wells will be drilled this year. The list already includes the names of villages in all our districts and we will do this as part of the investment program during the year."