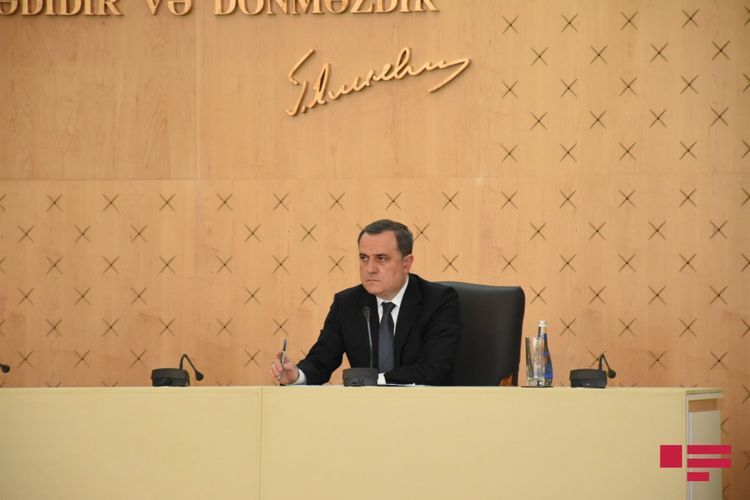 “The victories won by us on battlefield are giving us advantages in political and diplomatic plain”, said minister of Foreign Affairs Jeyhun Bayramov at the briefing held today, APA reports.

J. Bayramov said in the document signed in Moscow, Armenia was forced to accept humanitarian ceasefire: “At the same time, the basic principles of solution of the conflict have found their reflection in the document. Armenia has undertaken to hold substantive negotiations on the grounds of the basic principles within a very short time. Previously, Armenia rejected those principles. The successes achieved on battlefield in recent days allowed for forcing Armenia to accept this condition”.

The minister of Foreign Affairs noted that previously Armenia also put forward 7 pre-conditions: “One of them was the requirement to Azerbaijan to hold talks not with Armenia but with the so-called formation in the process of negotiations. Once again in the document signed in Moscow, Armenia was forced to confirm its consent in regard to keeping unchanged the format of the process of negotiations”.

J. Bayramov brought to the notice that in the Moscow negotiations, Armenia requested extra security guarantees: “Their main claim against us was that we set basic principles but we apply force to them. It was brought to the notice in the negotiations that Armenia has lost its right to talk about international law, it occupied over 20 percent of Azerbaijan’s lands, brought to condition of internally displaced persons over 1 million people. The reconciliation of ceasefire between the parties has found its reflection in the document. During the negotiations, Armenia wanted that the ceasefire would be ensured by means of the third forces. This wasn’t accepted because Armenia will use this for preservation of status-quo. This issue may be considered only after withdrawal of Armenia’s troops from the occupied territories. The basic principles include the phased withdrawal of the Armenian troops from our territories. This may also be in the form of withdrawal of the Armenian troops firstly from 5 regions and then from 2 regions, return of Azerbaijanis to Nagorno Garabagh”.

Kazakh FM : “We hope that trilateral agreements signed among Azerbaijan, Russia and Armenia will be implemented”