Pashinyan, where did you sign this document? - President Ilham Aliyev 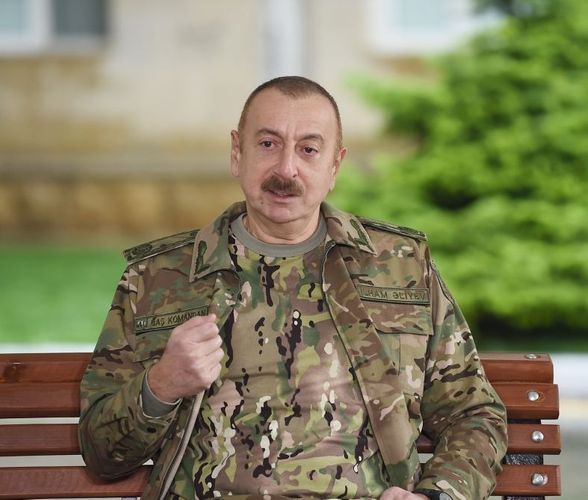 The joint statement signed on 10 November was in fact an act of Armenia’s peaceful capitulation. Just as after the end of World War II, Hitler's henchmen signed an act of capitulation in front of the military leaders of the allied countries, I also said that Pashinyan must sign an act of capitulation in a live format, in the form of a video conference, President of the Republic of Azerbaijan, Victorious Commander-in-Chief Ilham Aliyev said during meeting with the servicemen undergoing treatment at Clinical Medical Center No 1, APA reports.

“But frankly speaking, Russian President Vladimir Putin asked me not to insist on that too much. I thought that Pashinyan was already humiliated enough, was already punished for his ugly deeds, was already on his knees and had already accepted all my conditions. The signed statement also approved a timetable for the withdrawal of the occupying forces from Aghdam, Lachin and Kalbajar districts. I said that I did not object. I told him to sign it wherever he wanted, in a dark room, in a warehouse, far away from the cameras. And that is what happened. All the people of Azerbaijan saw the signing ceremony between myself and President Putin. Pashinyan, where did you sign this document? It doesn't matter much. Because it is impossible to find him now. And no-one can ask Pashinyan where he signed it,” the head of state said.