President Ilham Aliyev: The Second Karabakh War will go down in history as Azerbaijan’s glorious victory 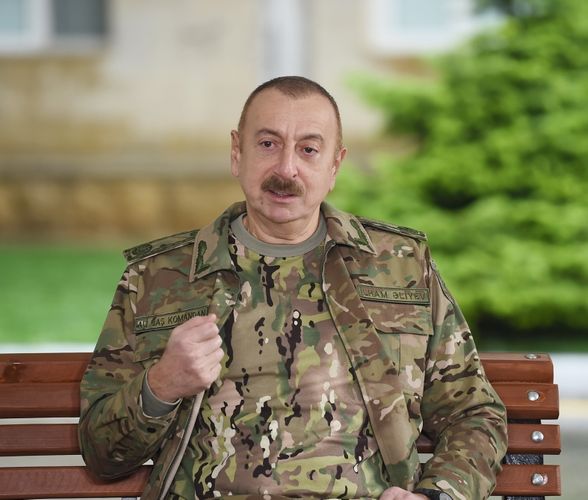 "The Patriotic War is over. Azerbaijan has won a brilliant victory in this war, our lands have been liberated from occupation, we have expelled the occupiers from our lands. I have come to congratulate you personally on this glorious victory, to express my gratitude to you, to express the gratitude of the Azerbaijani people to you for fighting heroically, for your exceptional contribution to expelling the enemy from our lands. You were wounded, you put your lives on the line and showed tremendous courage,"  President of Azerbaijan, Victorious Commander-in-Chief Ilham Aliyev said in a meeting with servicemen being treated at Clinical Medical Center No. 1, APA reports.

The head of state said: “The Second Karabakh War will go down in history as Azerbaijan’s glorious victory. All our people have shown unity and solidarity in achieving this victory. All the steps taken were aimed at inflicting crushing blows to the enemy with few losses and in a short period of time so that to force the enemy to leave our lands. Victory on the battlefield also led to victory in the political arena. If we had not won this victory on the battlefield, I do not believe that the occupier would have left the remaining lands. The enemy, which had been trying to occupy our lands for almost 30 years in various ways, wanted to perpetuate this occupation. We could not achieve any results through negotiations. We won this war at the expense of the lives of our martyrs, the courage of our servicemen and the policy of our state. May God have mercy on all our martyrs! May God send healing to you! May God send healing to all our wounded soldiers and officers!”