President Ilham Aliyev: "As a result of our efforts, Armenia today is a political, economic, investment, energy and transport impasse" 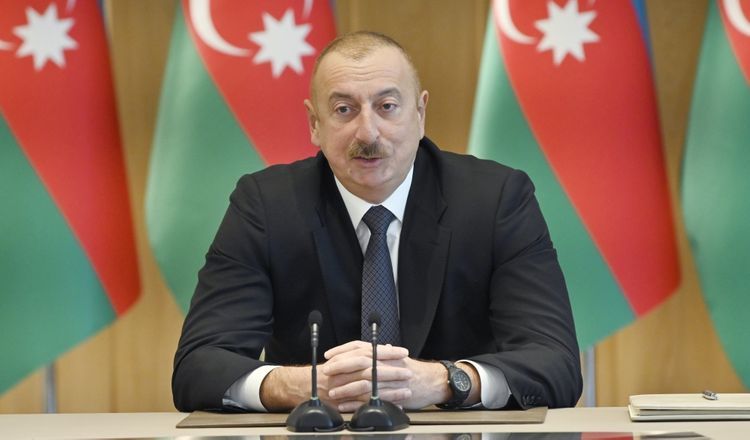 "I would like to express my attitude to another issue. As you can also see, the prime minister of Armenia has recently been speaking about his country’s “successes” and comparing Armenia to Azerbaijan. According to his conclusion, Armenia is ahead of Azerbaijan in many respects. I want to say right away – and there is no need to prove this – that such a theory is unfounded. Azerbaijan is far ahead of Armenia in all major respects. To confirm this, I simply want to cite a few events and voice some figures," President of the Republic of Azerbaijan Ilham Aliyev said during his closing speech at the meeting on the results of 2019, APA reports.

"As you know, Azerbaijan was elected a non-permanent member of the UN Security Council with the support of 155 countries in 2011. This is a high indicator in itself. First of all, because we achieved this high and honorable mission for the first time when our independence was only 20 years old. On the other hand, this was a factor directly testifying to the international authority of Azerbaijan because the absolute majority of the world community believed in us, trusted us and voted for us. I already informed the public about this event quite broadly before. However, there is an issue that is always overlooked – many are unaware of this. The truth is that in 2011 Armenia nominated itself before us. But after we had put forward our candidacy, they gave it a bit of a thought and saw that they would lose to us by 100 percent, so they quietly and cowardly withdrew their candidacy. They knew that we would win with a huge margin in the UN and that they would disgrace themselves. So the events which occurred nine years ago show how different the respect and authority of Armenia and Azerbaijan are in the international arena. Our election to the UN Security Council was a great political and diplomatic victory and, at the same time, a great victory over Armenia.

In 2016, Armenia carried out a military provocation against the peaceful Azerbaijani population, killing several civilians, including children. In response to this, Azerbaijan carried out a successful counter-offensive operation, liberated a part of Aghdara, Fizuli and Jabrayil districts, thousands of hectares of land from the invaders, and the Azerbaijani flag was hoisted on these lands. That was our military victory. Another military victory was secured in 2018. As a result of the successful Nakhchivan operation, a territory of more than 10,000 hectares was freed from the invaders, the Armenian armed forces, several important strategic heights were captured, allowing us the opportunity to exercise full control over Armenia’s strategic communications. This was our second military victory.

Here is the data on wages and pensions. In December 2019, the average salary in Azerbaijan was 723 manats, or $425, in Armenia $369. In terms of the purchasing power of the average wage, Azerbaijan ranks second in the CIS, while Armenia is ninth.

Moving on to the results in chess, which is an intellectual sport. In 2019, Dinara Huseynova won a gold medal at the European Championship among eight-year-olds. Saadat Bashirli and Yusif Karimli won bronze medals. Ayan Allahverdiyeva became European champion among 14-year-olds. Our women's national team beat Armenia at the European Championships and won bronze medals. At the junior world championship, Aydin Suleymanli became world champion among 14-year-olds. And Teymur Rajabov won the World Cup. Azerbaijan won 18 medals at the Olympic Games in Rio 2016, while Armenia won only four. Azerbaijan finished in 14th place in terms of the total number of medals.

Another important issue is that Azerbaijan is waging a consistent struggle against the glorification of fascism, while Armenia is glorifying the Nazis. A 6-meter monument was erected to the fascist executioner Nzhdeh in the center of Yerevan. This bloody criminal was arrested by SMERSH, sentenced to 25 years, died in prison and was not rehabilitated. A monument was erected in honor of such a person in Yerevan, and the prime minister of Armenia identifies this executioner with Solzhenitsyn and Molotov. Nzhdeh is the author of the notorious saying: he who dies for Germany, dies for Armenia, and he said this during World War II. This expression already reflects his despicable essence. Therefore, Azerbaijan supports justice here too, while Armenia is on the side of evil forces.

Based on an analysis by the reputable news agency News & World Report, a list of the most powerful countries in the world has been compiled. Only 80 countries are included on the list, and Azerbaijan is in 45th place on this list. Armenia is not included there at all. In terms of the pace of economic development, we are in 35th place on a global scale.

Azerbaijan is implementing giant projects of world significance. Among them are the Baku-Novorossiysk, Baku-Supsa and Baku-Tbilisi-Ceyhan oil pipelines, the Baku-Tbilisi-Erzurum and TANAP gas pipelines. The Southern Gas Corridor will be commissioned this year. The Baku-Tbilisi-Kars railway has been commissioned, and cargo traffic along this railway is increasing every year. Baku-Tbilisi-Kars is an integral part of the East-West transport corridor. We have successfully implemented this project with neighboring countries – Turkey and Georgia. With other neighbors, Russia and Iran, we are successfully working on the North-South corridor. It is possible to say that this corridor is functioning. Further steps are simply being taken to make this corridor more efficient. These gigantic energy and transport projects have bypassed Armenia. These are our neighbors. At the same time, with the exception of Russia, they are the neighbors of Armenia. So we have established relations with our neighbors on the basis of friendship, cooperation and sincerity, and this is exactly why we have succeeded in implementing these projects. Armenia, for its part, has been neglecting its neighbors for centuries, trying to grab something from them, to lay claim to their lands, to falsify history, to falsify and appropriate historical monuments. This is the difference.

We have isolated Armenia from these energy and transportation projects and never made a secret of that. A few years ago, I said that we would isolate Armenia from all the important projects being implemented in the region with our participation, and we achieved this – as always, we kept our word. As a result of our efforts, Armenia today is a political, economic, investment, energy and transport impasse. This situation will continue until they leave our lands. So if the Armenian leadership once again tries to compare Armenia to Azerbaijan on the basis of some fictitious data, let it think carefully. Speaking the language of sports, Azerbaijan is in the top division, while Armenia is in the third league, and this difference will gradually increase.

You know, I’ve never compared Azerbaijan to any country before. We are not doing our work to leave anyone behind. We are doing it for the benefit of the Azerbaijani people and state. I had to provide this comparative analysis to you and the Azerbaijani people simply to expose another Armenian lie. In fact, the figures I have cited reflect reality, while those cited by Armenia are yet another myth, yet another lie," Azerbaijani President İlham Aliyev said.