President Ilham Aliyev: "Today, Azerbaijan is in the forefront of all rankings" 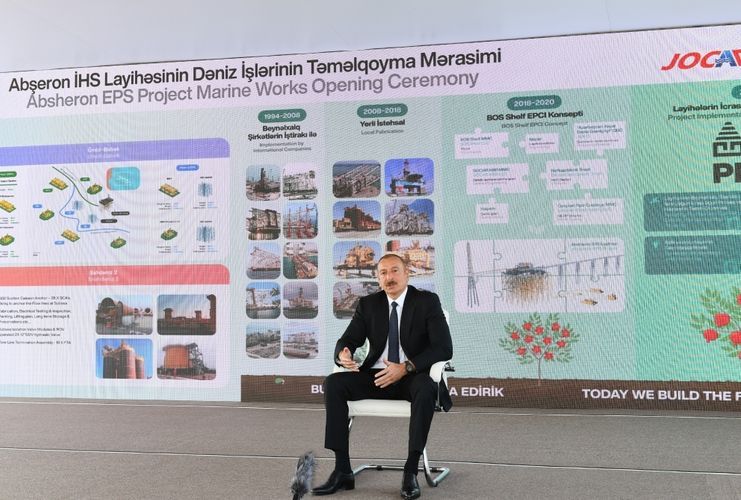 “Notice that we have been independent for less than 30 years, but look at what we are doing. Today, Azerbaijani oil fully serves the interests of the Azerbaijani people, and not only our major oil and gas projects, but also all other areas. Azerbaijan is in the forefront of all rankings. The infrastructure policy pursued in Azerbaijan and the implementation of infrastructure projects are referred to as examples. In Soviet times, there were no gas pipelines in our mountain regions. We have extended first gas lines to Dashkasan, Gadabay and Lerik. At that time, Azerbaijani gas was transported to other republics, but there was no gas in some parts of the republic. Now gasification has reached 96 percent,” President of the Republic of Azerbaijan Ilham Aliyev said in an interview with Azerbaijani television channels after the groundbreaking ceremony for the Absheron field offshore operations at the Heydar Aliyev Baku Deep Water Jackets Plant on 19 September, APA reports citing the Presidential press service.

“We have become a space-faring nation, we are implementing huge oil and gas projects. Not only in the economic and industrial spheres, but also in sports – we finished 14th for the number of medals at the Olympic Games. Was this possible to imagine in the Soviet era? If someone had said at the time that one of these was possible, people would probably laugh at them. This is the advantage of independence.”

“We live in a free and independent country, we have our own destiny. Our natural resources serve the interests of our people. We have invested oil revenues very efficiently. We protecting them and strengthening our army. Therefore, the advantages of independence are obvious. If someone remembers the past with such nostalgia, we must give these people an appropriate answer. Every individual who opposes independence and tries to humiliate it betrays our state. Independence is our core value, and the stronger we are, the stronger our independence.”