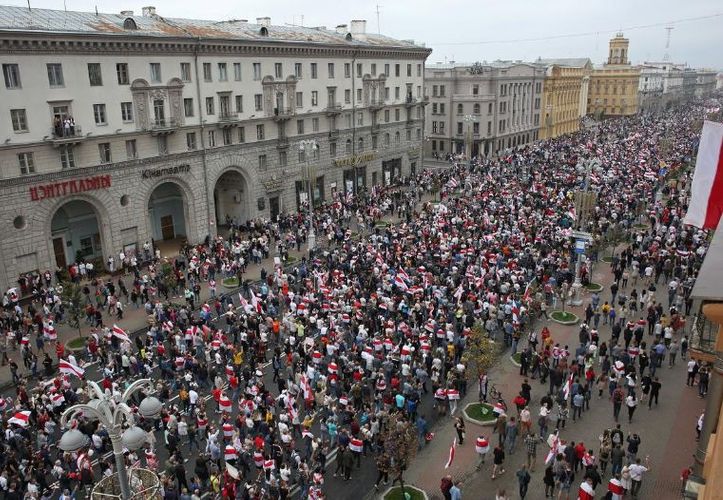 Tens of thousands of protesters demanding President Alexander Lukashenko step down flooded into Minsk on Sunday, at one point staging a brief demonstration near his residence, as the Belarus army warned the crowd it would respond to any unrest, APA reports citing Reuters.

Huge nationwide demonstrations that erupted after the country’s disputed election on Aug. 9 have provided the biggest challenge yet to the veteran leader’s 26-year-old rule and tested the loyalty of his security forces.

The streets of Minsk turned red and white as a flood of demonstrators carried flags symbolising their opposition to Lukashenko and chanted for him to leave power and for new elections to be held.

The crowd marched towards Lukashenko’s residence at the Independence Palace, on the northern edge of the capital, the majority gathering at some distance, while a smaller group approached the building, a Reuters witness said.

A helicopter was seen flying out of the residence as protesters milled below, some chanting “coward” as it passed above, apparently referring to Lukashenko, the Reuters witness said. After some time, the majority of the protesters began to march back towards the city centre.

It was the first time in this month’s demonstrations that protesters have neared the building’s doors. The building was surrounded by lines of armed police.

The approach to the palace took place after a crowd estimated by a Reuters witness to number as many as 200,000 rallied in central Minsk for the second weekend in a row.

Earlier, the defence ministry said it would take on security around national memorials and issued a direct warning to protesters whom it likened to fascists.

The ministry said memorials, specifically ones to the dead of World War Two, were holy sites that must not be desecrated.

“We categorically warn: any violation of peace and order in such places - you will have the army to deal with now, not the police,” it said in a statement. “We, soldiers, will not allow these places to be desecrated, there can be no fascism there!”

The interior ministry issued its own statement warning that any unsanctioned protests would be considered illegal. It said 22 people had been arrested on Saturday when smaller-scale protests took place across 55 towns and cities.