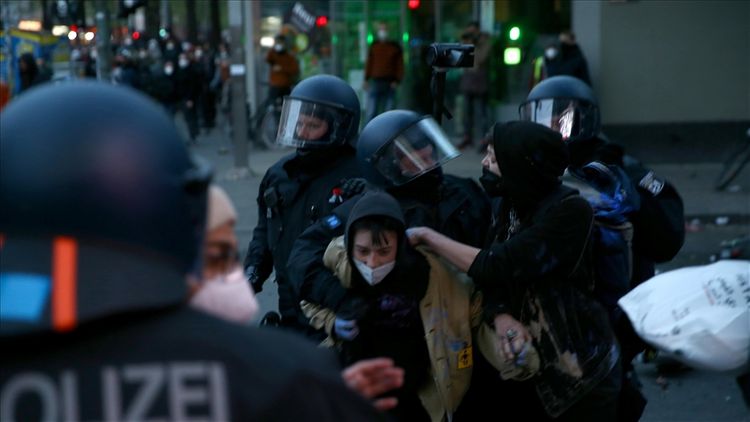 Berlin police have arrested at least 354 people who took part in May Day demonstrations that devolved into full-scale riots in the German capital, according to local media reports on Sunday, APA reports citing AA.

Reacting to the May 1 unrest, Berlin's Interior Senator Andreas Geisel lashed out at the mostly young rioters for attacking police officers.

This has nothing to do with political protest, said Geisel.

"We will not accept that some violence-seeking autonomists want to take away our May 1 as a day for peaceful demonstrations," he added.

Police also reported that at least 93 people, including police officers, were injured in street clashes in the district of Neukoelln.

Around 5,600 police officers from several federal states were reportedly on duty during the May Day rallies in Berlin.

Black-clad protesters threw bottles, firecrackers and stones at baton-wielding police who tried to disperse the crowd with pepper spray and water-gun trucks.

Police were repeatedly attacked while trying to pull troublemakers out of the crowd as several protesters were arrested.

Followers of the PKK terror group also rallied during protests in Berlin, carrying rags of the organization and its Syrian branch, YPG.

Some also carried posters of Abdullah Ocalan, the group's leader who is jailed. Police did not intervene although the group has been banned in Germany and the use of the terror organization’s symbols has been prohibited by the Interior Ministry.

Dumpsters and pallets were set on fire in the Neukoelln district as paramedics were on the scene to treat the wounded.

The demonstrations were organized by the trade unions and radical leftist and anarchist groups, but right-wing groups and critics of coronavirus measures also met for permitted and unauthorized protests across Germany, including in the cities of Hamburg and Frankfurt.

The situation did not calm down until late Saturday night.