No decrease in virus spread over summer, Koca says 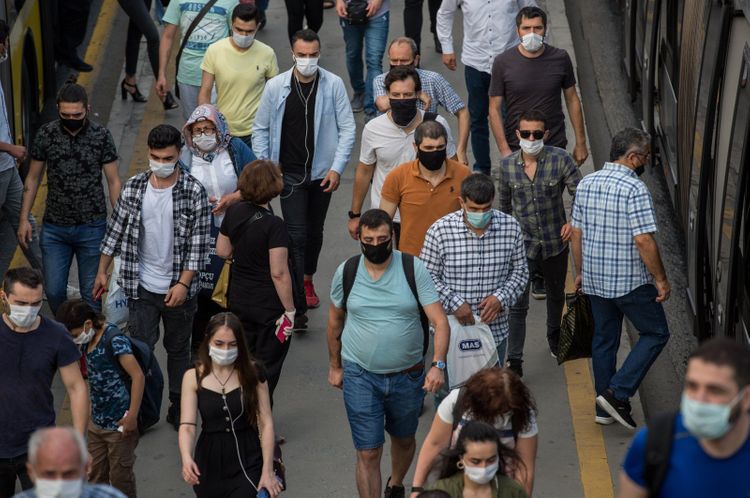 There has been no decrease in the spread of the coronavirus over summer, Health Minister Fahrettin Koca said Wednesday following a meeting with the science committee, APA reports citing Daily Sabah.

"There is no scientific evidence that the virus has a reduced ability to make patients sick."

During the press conference, he stressed that the rise of cases across the world served as a warning to the country about the need to extend measures. Giving up on masks despite illnesses would compromise such measures, Koca said noting the recent announcement that wearing masks outdoors is now obligatory in a total of 62 of Turkey's 81 provinces. The summer heat, in particular, is making it hard to wear a mask outdoors, he admitted but stressed that the measure was for the country's well-being.

“Despite an increase in confirmed COVID-19 cases, the need for intensive care units has decreased,” he said and stressed that the average age of people needing intensive care having been intubated or lost their lives has risen from 71 to 74. “Even if our young people do not need to be hospitalized, the risk of transmitting to elderly citizens, especially those with chronic diseases, is very high.” It cannot be said that the effect of the virus has decreased but that the early approach to the treatment has resulted in a more positive outlook, the minister said.

In response to a question over whether Turkey was experiencing a second wave of the virus in light of the rising number of confirmed cases, Koca said: “We are still seeing the effects of the first wave.”

Relaying the daily numbers for Turkey the minister stated that the daily toll had a slight decrease and stands at 24, while the confirmed cases remain at 1,492. A total of 53,486 tests have been carried out in the last 24 hours, while 1,386 people have recovered from the virus.

Regarding the development of a vaccine, he said that studies were progressing at a good pace but that it seemed unlikely to proceed to clinical trials before September or October. There have been talks with Russia and China in regard to working together in the clinical trials.

Meanwhile, he said that the committee had no plans for restrictions over the entire country, but depending on provinces, cities and districts, restrictions "are and will be introduced depending on the situation."

As for the claims that the virus is mutating Koca said: “So far, there is no information that there is a concrete, scientific mutation. We know that there are different types of viruses.” A mutation could always happen, but there is no concrete information at the moment, he stressed.