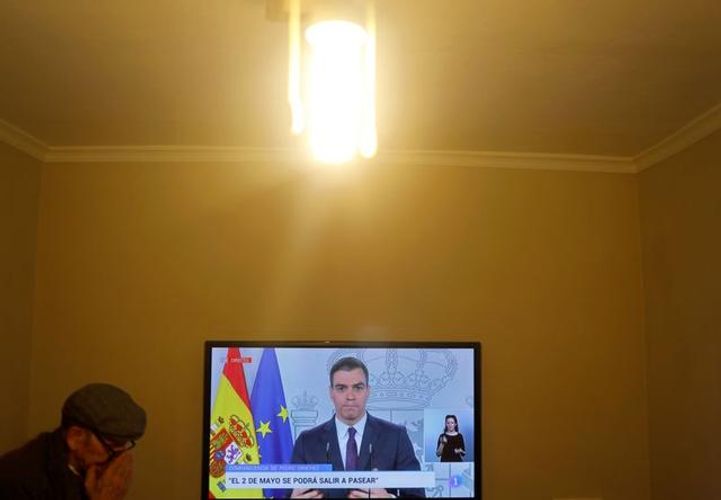 In a televised address Sanchez said Spaniards will be allowed out to exercise alone from May 2 if the coronavirus toll continues to fall. People living together will be permitted to take short walks together.

He also laid out the government’s wider plan to loosen the lockdown at different speeds across different regions, depending on whether they meet with criteria established by the World Health Organization.

“We will not suddenly recover activity across all sectors,” he said. “The deescalation has to be gradual and asymmetric... We won’t all advance at the same pace but we will follow the same rules.”

Sanchez said the plan, which the government has been preparing with experts for three weeks, will be rolled out through May and “we will see what happens” in June. He said he will hold a virtual meeting with regional leaders on Sunday to discuss the plans, which the cabinet is set to approve on Tuesday.

His government’s handling of the crisis has met with fierce criticism and on Saturday residents across Madrid came to their balconies to bang pots and pans in protest.

Similar protests earlier in the week prompted the government to reverse an earlier decision and let under 14s leave their homes for the first time since the state of emergency was declared on March 14.

From Sunday they will be allowed one hour of supervised outdoor activity per day between 9am and 9pm, staying within one kilometre of their home.

Adults can accompany up to three children, who will not be allowed to use playparks and must adhere to social distancing guidelines, remaining at least two metres from other people.

Sanchez urged parents be responsible and follow the guidelines with the “maximum safety precautions”, while top police officials cautioned that children must stick to the rules.

Spain’s Health Ministry said 378 more people had died after being diagnosed with the coronavirus, up slightly on Friday’s 367, the lowest in the past month, but well down on the high of 950 seen on April 2.

On April 13 sectors including construction and manufacturing were allowed to reopen, but with most people still confined to their homes except for essential reasons, shops, bars and public spaces remain closed.