Vusal Gasimli: Financial Security of Armenia Is Facing the Threat 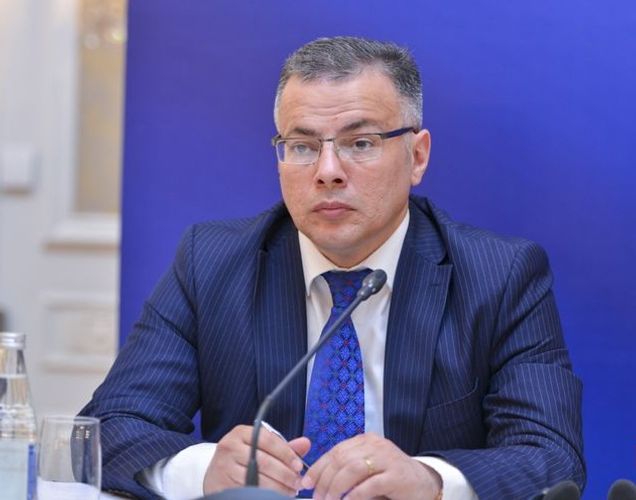 The Executive Director of the Center for Analysis of Economic Reforms and Communication of the Republic of Azerbaijan, Doctor of Economic Sciences Vusal Gasimli told that economic development of Armenia is based on raising debts, and gradually this country is becoming more and more dependent on foreign borrowing, APA reports.

So, if in 2019 the total state debt increased by 6 percent, then for the first 6 months of the current year only, this indicator has grown by 5 percent, and the external debt - by 4.6 percent. According to the various scenarios of the mission of the International Monetary Fund (IMF), in the nearest 5 years the ratio of the total state debt to the budget revenues will exceed 200 percent. Reduction of tax revenues and growth of fiscal expenditures will further aggravate the problem in relation to the budget deficit, and, according to the estimates of IMF experts, this year the share of the budget deficit in GDP will exceed 5 percent, and the share general debt in GDP of will be more than 60 percent. As we see, both influential structures note that Armenia's financial dependence will remain high. 79 percent of this country’s central government debt is in foreign currency. Despite all planned fiscal measures, the International Monetary Fund forecasts that by 2025 this figure will be above 73 percent. Of course, all this will keep the economy of the country in a volatile and unstable position in relation to the currency risk for a long time. The steps taken by this country, as well as its borrowings to mitigate the consequences of the pandemic show that economic and financial security in the country is getting worse. Thus, in comparison with the end of 2015, by the end of 2019, the volume of foreign loans of the country has doubled.

At the same time, the volume of loans attracted to Armenia from abroad has reached 4 billion 539 million US dollars, which makes about 33 percent of GDP. The largest share of credit resources raised by Armenia belongs to the structures of the World Bank (International Bank for Reconstruction and Development, International Development Bank), Asian Development Bank and Eurasian Development Bank as well as to Russia, Germany, and Japan.  We hope that by observing the aggressive, unreliable actions of Armenia that destabilize peace in the region, the above-mentioned organizations and countries will limit the issuance of funds to this country.

The financial dependence of the Armenian economy on foreign resources is not limited to the parameters of debt raising. This country highly depends on money transfers. In terms of the share of money transfers from abroad to the GDP of Armenia, the country occupies the worst position among the countries of the world. Analyzing the statistics of such an influential platform as the Global Knowledge Partnership on Migration and Development (KNOMAD), we can see that in 2019, the remittances from abroad accounted for 11.4 percent of the economy. According to statistics, for this indicator, Armenia occupies 153rd place in the world, and is in the "better" position in relation to 25 countries. This demonstrates the poor state of economic security of the country. The officials of Armenia state that the share of foreign financial transfers in the economy of the country is much higher than shown in the official statistics, and the assessments of different experts show that this indicator is around 25.

We should note that complying with the statement of the World Bank from April 22, 2020, in the current year, global money transfers will fall by 20 percent, which is the sharpest reduction for the last years. Besides, the sharpest reduction of this downward chain will be in Europe and Central Asia (27.5 percent). Since the largest amount of money is transferred to Armenia from the mentioned region, the country will encounter a sharp decline in income. There is also another point to be touched upon. The matter is that the economic situation in Armenia was tense before the pandemic. According to International Monetary Fund information, in comparison with the previous year, in 2019, the ratio of investments in this country, to GDP decreased by 5 percent, and the savings ratio decreased to 2 percent.

The mission of the International Monetary Fund forecasts that by the end of 2020, the share of the current account deficit in GDP will rise to 8.6 percent, and the financial account will reduce sharply as well. The reason is the sharp reduction of foreign private investment in connection with the withdrawal of deposits of non-residents and drastic decrease of foreign aid to the country (especially from Russia). Only in March, the Armenian dram lost 5 percent of its value. The problems that arose in April in connection with the Russian company Gazprom because of the price of gas, energy dependence of this country, and economic problems limit its ability to attract sufficient financial resources for diminishing the negative consequences of the pandemic. The International Monetary Fund forecasts that by the end of 2020, net direct foreign investment in the country will amount to about 161 million US dollars, which means a reduction in 2.5 times in relation to 2019. Moreover, according to forecasts, by the end of the year the country's international reserves will decrease, reducing from 2.9 to 2.2 billion US dollars.

As we can see, all parameters of Armenia’s economic indicators demonstrate that the country is dependent on foreign borrowings. According to all reliable forecasts, the situation in this country will worsen gradually, and it will face serious economic dependence. Particularly, international experts considers that in the current period, the socio-economic drivers of changes that occurred in Armenia in 2018, will come to greater motion and lead to new negative political consequences for the country. Provocation of the country, the financial and economic security of which are under the threat, against Azerbaijan is the beginning of the end.”