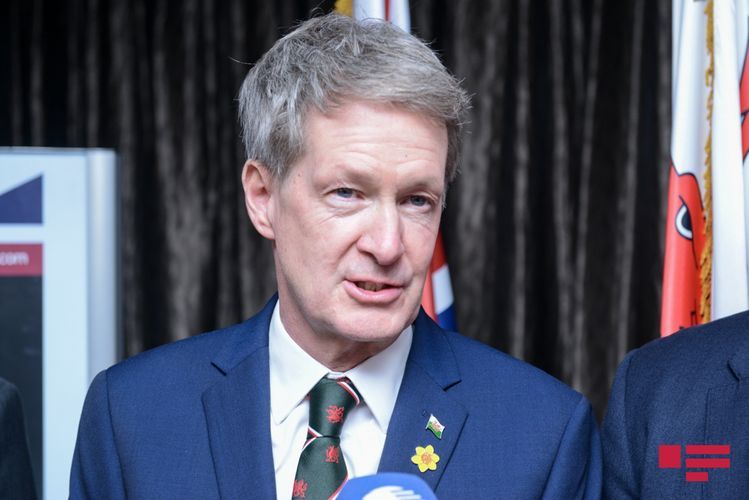 “The Welsh national team has visited Baku several times. I am sure that they are looking forward to returning here again with great pleasure”, the Ambassador of the United Kingdom to Azerbaijan James Sharp told apasport.az website.

The ambassador having arranged an event dedicated to the Welsh National Day and the Saint David’s Day, commented on holding the first match in Baku by their national team in the group stage of the EURO-2020 championship. He said he believes our capital city will be lucky for their team: “The Welsh footballers always arrive here with the “we are returning home” motto. At the meeting with Azerbaijan’s President Mr. Ilham Aliyev, we presented him the uniform of the Welsh national team. We would like very much that the country’s leader would participate in one of the matches of our team with that uniform put on him”.

James Sharp admitting that the combined Turkish team will enjoy greater fan support in Baku during the European championship, said, despite this, he believed the struggle on the football ground will be different: “I think the combined Turkish team should feel more worried about their upcoming encounter with us. The fan support is a completely different issue. But the main thing is how the match will come along. The Welsh team is very strong, and in the last European championship, it won victory over such teams as both the Belgian and the Russian teams and gained entry-pass to semifinal. I believe they will show successful play this time as well”.

Note that the Welsh national team which will encounter the Swiss  team on June 13 and the Turkish team on June 17 at Baku Olympic Stadium, will come face to face with the Italian team in the last match of A group in Italy’s Rome City (on June 21).