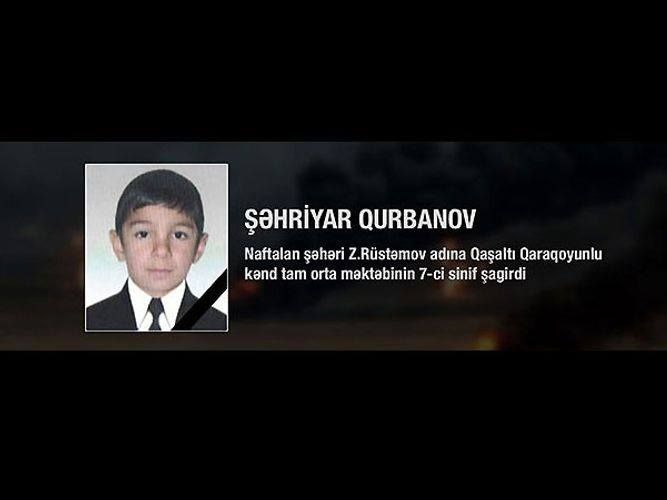 The death of the footballer of the CYSS (Naftalan) team Shakhriyar Gurbanov (born in 2007), who played in the league held with the organizational support of AFFA, caused a great resonance, APA reports.

The Associated Press news agency has published an article regarding the death of a juvenile schoolboy in Naftalan City as a result of infliction of fire by the Armenian armed forces on our residential settlements beginning from September 27.

It was stated that the Azerbaijan Football federations Association (AFFA) has requested support from UEFA members regarding the footballer of 13 years old who was killed on the backdrop of the conflict with Armenia on Thursday. It was also stressed that the dispute continuing for dozens of years regarding the Nagorno Garabagh region being a part of Azerbaijan’s territory but currently being under the control of the ethnic Armenians was ignited during the last one week.

AFFA’s executive vice-president Elkhan Mammadov making a statement to the agency regarding the tragedy asked the European football family to show solidarity: “At this hard moment, we call on the European football family to show solidarity in order to condemn the aggression against civilians, to stop sustaining of damage by youths and especially juvenile representatives of all nations in that or another form as a result of military operations”.

In the letter signed by Mammadov, the appeal was made to senior officials of the National Associations being members of UEFA to demonstrate solidarity using the #StopChildMurder hashtag.

It was especially stressed in the article that the player of the children’s league Shahriyar Gurbanov was killed as a result of infliction of fire by the Armenian armed forces on his native city situated 50 kilometers far from the conflict zone. It was written that the tension between the two countries also exerts a negative influence on the football relations, also after the neighboring countries refused to play with each other in the qualification group of EURO-2008, UEFA separated their national and club teams in lot drawings for tournaments.

Note that FIFA’s general secretary Fatma Samoura has sent a letter of condolence to AFFA regarding the killed Shahriyar Gurbanov.