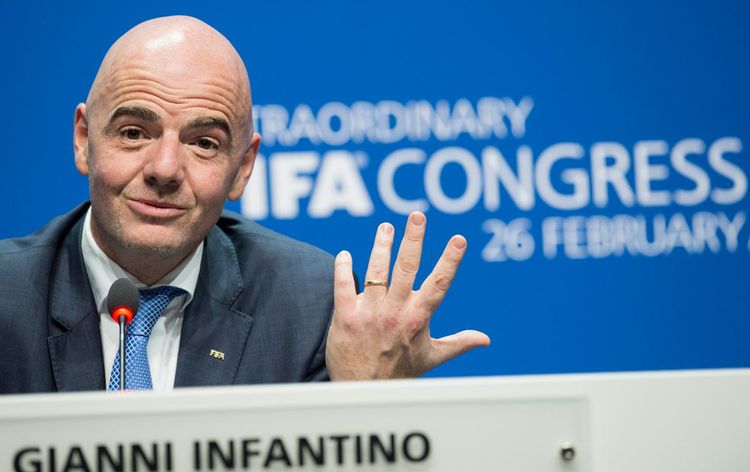 FIFA President Gianni Infantino has congratulated the Russian football authorities for all of their efforts in maintaining the sport of football despite the ongoing global spread of the novel coronavirus, APA reports citing TASS.

The Russian Football Union (RFU) held a conference earlier on Friday discussing the developments of the sport amid the COVID-19 pandemic and FIFA President Infantino sent a recorded video message for the participants in the meeting.

"Looking back, in Russia as well as, unfortunately around the world, we have been taken by surprise by this virus," Infantino said in his video message, addressed to the Russian Football Union.

"The COVID-19 has put us all in a very difficult situation, but I would like to start by congratulating all of you, for the work you have done to bring football back for spectators, protocols’ [officials], and also back with the resumed football at the professional level," Infantino said.

"I think this is the most important as the football has shown in a perfect way how we can bring people together against Covid," he said

FIFA chief Infantino also reiterated his opinion about Russia’s contribution to the organization of the FIFA World Cup in 2018 saying Russia was "a beautiful country, which hosted two years ago the best World Cup ever."

"As far as I am concerned, I am looking forward to come back to Russia very soon," Infantino continued.

Russia hosted its first-ever FIFA World Cup in 2018, which kicked off in Moscow with a remarkable opening show at Luzhniki Stadium on the evening of June 14, 2018 and ended with a spectacular final match, played also at the Luzhniki Stadium, where France confidently defeated Croatia 4-2 to win the much-coveted World Cup Trophy.

The championship was organized at 12 stadiums in 11 cities across Russia, namely in the cities of Moscow, St. Petersburg, Sochi, Kazan, Saransk, Kaliningrad, Volgograd, Rostov-on-Don, Nizhny Novgorod, Yekaterinburg and Samara.

Infantino said after the world championship in 2018 that Russia had staged "the best World Cup ever." In late December 2018, FIFA announced in its statement that the World Cup in Russia set a new record as far as audiences go in the history of world football championships since over half of the world’s population watched the matches on TV at home, out of home or on digital platforms.

"We will play next year in August the FIFA Beach Soccer World Cup in Russia," the FIFA president continued speaking in his address to the RFU conference participants in Moscow on Friday.

The first FIFA Beach Soccer World Cup was held back in 1995 and Russia has never hosted this international event. The Russian national beach soccer team won the World Championships twice (in 2011 and 2013).

The 2019 FIFA Beach Soccer World Cup was hosted between November 21 and December 1 by Paraguay’s Asuncion, where the Russian national team won the bronze edging Japan (5-4) in the match for third place. The Portuguese squad won the championship in Paraguay defeating Italy 6-4 in the final.