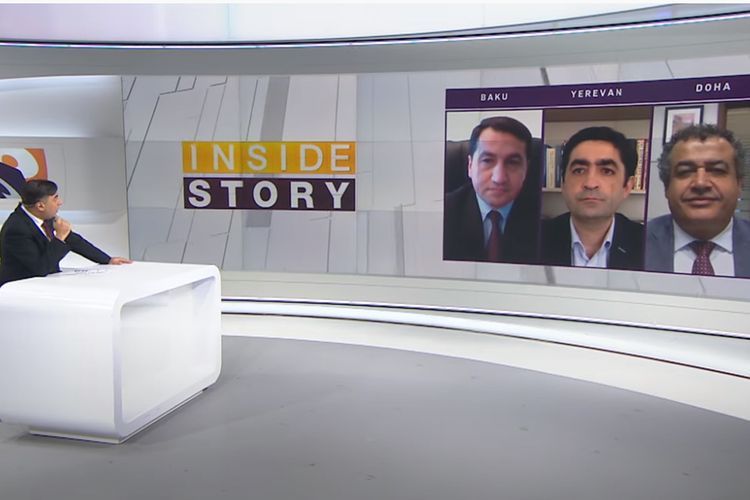 The Assistant to the President of the Republic of Azerbaijan, the Head of the Foreign Policy Issues Department of the Presidential Administration Hikmet Hajiyev came on “Inside Story” TV show on the “Aljazeera International” TV channel for debate with Arsen Xaratyan, former diplomatic advisor of Armenia’s prime minister Nikol Pashinyan, APA reports.

H. Hajiyev said the conflict should be solved in a phased way through negotiations and as a first step in this area, the Armenian troops should be withdrawn from the occupied Azerbaijani territories, but brought to the notice that Armenia’s prime minister disrupts the process of negotiations by his controversial statements.

He said the political and legal grounds of solution of the conflict have been determined and those grounds are based on the international law, relevant resolutions of the UN Security Council and Helsinki Final Act.

H.Hajiyev stressed that Armenia implements annexation of the Azerbaijani territories hiding behind the ceasefire regime, commits unlawful actions including implementation of illegal settlement policy on our occupied territories.

In response to the claims of the former diplomatic advisor of Armenia’s prime minister regarding establishment of democracy in Armenia, H. Hajiyev said democracy is the last issue that Armenia should talk about. The Presidential aide added that the revolutionary dictatorship is being established in Armenia, journalists and opposition leaders are being arrested. He also noted that a democratic state doesn’t occupy territory of other state and doesn’t commit bloody ethnic cleansing.

In response to the claims to Turkey of the opposite party, H.Hajiyev stressed that the territorial claims to Turkey are put forward in Armenia’s Constitution, the “great Armenia” propaganda based on chauvinism is conducted in Armenia at state level and the young generation is grown up in this spirit. H. Hajiyev said the reactionary policy conducted by Armenia is to be blamed for closure of Armenia’s borders and living of Armenia in self-isolation condition. H. Hajiyev noted that Armenia’s new national security strategy has been drawn up on the basis of racism and chauvinism principles.

As for the closure of Turkey-Armenia border, the Presidential aide noted that Turkey closed its borders with the aggressor country Armenia being guided by the UN Statutes after occupation of Azerbaijan’s Kelbejer region by Armenia making attack from its own territory.

In the course of the TV show, H. Hajiyev brought to the notice the incidents occurring on Tovuz site of the state border, another provocation and military adventure of Armenia, the cases of deliberate targeting of civil people by Armenia.