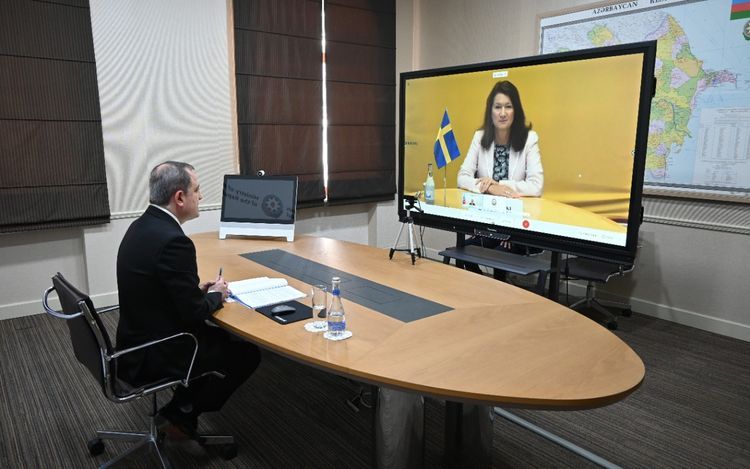 Swedish Foreign Minister Ann Linde noted that the visit to Azerbaijan was postponed to November and said that during the upcoming visit the parties will discuss issues related to Sweden's upcoming OSCE chairmanship along with the bilateral relations.

Expressing concern over the tensions in the region, Minister Ann Linde stressed the importance of peace and inquired on the current situation.

Minister Jeyhun Bayramov briefed his counterpart on the grave consequences of the aggressive policy of Armenia against Azerbaijan, highlighting the decisions and documents that constitute the grounds for resolution of the conflict, including provisions of the relevant UN Security Council resolutions. The minister also informed his Swedish counterpart on the recent provocative activities of the Armenian leadership, including the attempted attack on the Azerbaijan-Armenia border on July 12-16, the failed attempt of an Armenian sabotage-reconnaissance group on August 23, illegal activities in the occupied territories of Azerbaijan, as well as other provocative statements. FM Bayramov also stressed the need for the immediate withdrawal of the armed forces of Armenia from the occupied territories to ensure lasting peace and security in the region.

Minister Ann Linde noted that Sweden supports a peaceful solution to the conflict and the efforts of the OSCE Minsk Group. It was highlighted that states should respect the main principles of the Helsinki Final Act.

During the meeting, the sides exchanged views on other issues of mutual interest.