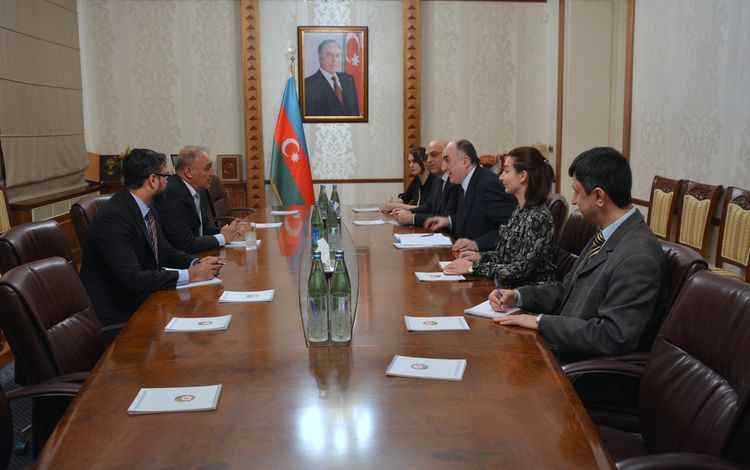 Minister Elmar Mammadyarov received Saeed Khan Mohmand, Ambassador of the Islamic Republic of Pakistan to the Republic of Azerbaijan upon the termination of his diplomatic tenure, APA reports citing the press service of the Ministry.

At the beginning of the meeting, Ambassador Saeed Khan Mohmand expressed his gratitude for the support rendered to him to fulfill his diplomatic activities in Azerbaijan.

During the meeting, the sides expressed satisfaction over the current status of bilateral relations, the level of current development and perspectives of cooperation between both states. The importance of promoting positive dynamics in the areas of traditional cooperation between Azerbaijan and Pakistan, as well as a rich potential in tourism, transit corridors, etc., were pointed out. It was agreed that high-level visits and the activities of the Intergovernmental Commission play a special role in the further development of bilateral relations.

Minister Elmar Mammadyarov underlined the successful development of bilateral ties. He cited Pakistan's traditional support for Azerbaijan in the context of international efforts to resolve the Armenia-Azerbaijan Nagorno-Karabakh conflict as a vivid example of solidarity between the two friendly countries.

Ambassador Saeed Khan Mohmand, his turn, thanked Azerbaijan for the support and sincere attitude towards Pakistan.

In this regard, the parties stressed the exceptional importance of the implementation of the UN Security Council's resolutions for the settlement of conflicts.

At the meeting, the sides exchanged their views on other regional and international issues of mutual interest.

Minister Elmar Mammadyarov highly appreciated the efforts of Ambassador Saeed Khan Mohmand in the development of bilateral relations and wished him every success.