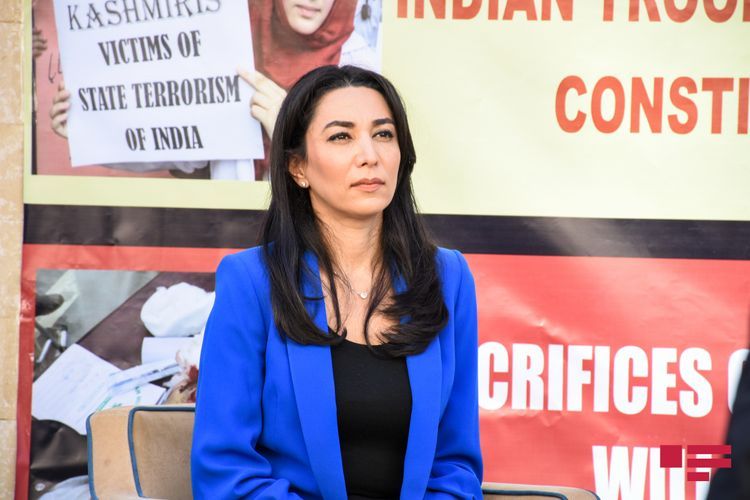 Commissioner for Human Rights (Ombudsman) of Azerbaijan Sabina Aliyeva has appealed to the international community concerning the eco-terrorism of Armenia in the occupied territories of Azerbaijan and its intentional fires aimed at destruction of forests of Shusha region, Ombudsman Apparatus told APA.

"On 5 November 2001, November 6 was declared as the International Day for Preventing the Exploitation of the Environment in War and Armed Conflict in accordance with the UN General Assembly Resolution A/RES/56/4.

Unfortunately, it should be said that ecological terror does not bypass Azerbaijan either. As a result of the continued around thirty-year military aggression of Armenia, the nature, biological diversity, water reservoirs of Azerbaijan, as well as the environment of the areas under the occupation have been seriously affected, which consequently, caused to destruction and severe damage of the environment.

As a result of military operations and use of internationally prohibited weapons by Armenian armed forces, not merely the natural environment has been exposed to physical and chemical pollution, but various species of rare plants and animals, flora and fauna biodiversity have been destroyed.  Chemical pollution of fresh water sources resulted in violation of self-regulation process in rivers and lakes, as a result of which water ponds become more hazardous and dead zone.

Not surprisingly yet in 2006 the UN General Assembly Resolution A/RES/60/285 on “The situation in the occupied territories of Azerbaijan” has also called for assessment of and counteraction to short and long-term environmental degradation of the region.

In 2016 Parliamentary Assembly of the Council of Europe adopted Resolution No.2085 titled “Inhabitants of frontier regions of Azerbaijan are deliberately deprived of water”, demanding the immediate withdrawal of Armenian armed forces from the concerned region and allowing access by independent engineers and hydrologists to carry out a detailed survey on the spot.

Within this period of time, natural resources in the occupied areas of Azerbaijan have been plundered, 163 mineral resources deposits, including gold, mercury, copper, lead, zinc, coal and others, also forest  cover, rare trees have been subjected to illegal exploitation by Armenia.

In response to another provocation and the continued occupation by Armenia, since 27 September 2020, Azerbaijani military successfully continued its counter-offensive operations to restore its territorial integrity in conformity with international law and universally recognized state borders as per Article 51 of the UN Charter and four relevant UNSC Resolutions (1993).

Targeting areas far from the frontline and the civilians who are not direct part of active hostilities and killing of many peaceful citizens, including children and women and even, shelling of historical, cultural and religious monuments, cemeteries with ballistic missiles and artillery are only one part of the crimes committed by Armenian armed forces.

The position of the Republic of Azerbaijan is based on the Article 51 of the UN Charter, four relevant UNSC Resolutions (1993) and the norms of international humanitarian law.

Due to continuing nearly 30-year eco-terrorism committed by Armenia in the occupied areas of Azerbaijan, at the present, a rare forest cover is being destroyed through deliberately firing the wild forests of Shusha with the use of toxic and difficult to extinguish substances.

The destruction of a unique ecosystem with a total area of more than 8,000 hectares, consisting of valuable and perennial dense forests of oak, juniper, beech, hornbeam, pine, ash, and walnut, is a hardest blow to endemic biodiversity. Hence, this means serious violations of the international treaties in relation to the protection of the environment, including the UN Convention on the Prohibition of military or any other hostile use of environmental modification techniques, to which Armenia is also a party. According to experts’ opinion, forest fires caused by white phosphorus bombs cannot be extinguished and putting out such fires naturally is not also possible, and so, such fires last long. This is environmental terrorism.

Taking into consideration all the above-mentioned facts, on November 6-the International Day for Preventing the Exploitation of the Environment in War and Armed Conflict, we call on international organizations, including all stakeholders acting for ecology and environmental protection to take all feasible measures in order to stop and to prevent the environmental terrorism committed and currently being continued by Armenia and to establish international legal responsibility of the aggressor State to prevent its recurrence."