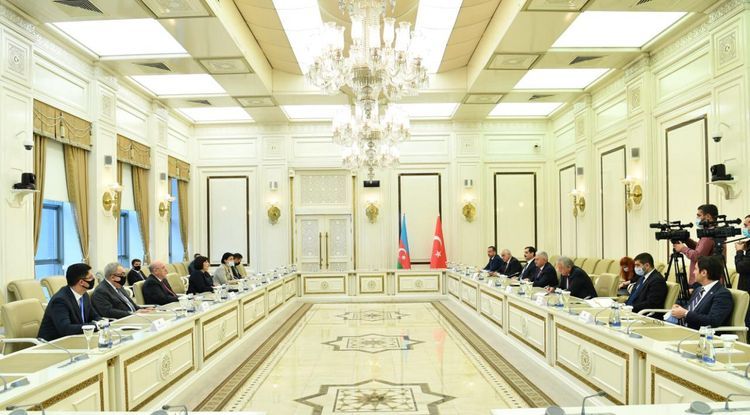 On November 2, the speaker of Milli Majlis Sahiba Gafarova met with a delegation led by Former Prime Minister of Turkey, Former Speaker of the Turkish Grand National Assembly, Member of Parliament, the press service of press and Public relations of Milli Majlis told APA.

Greeting the guests, the speaker has expressed deep gratitude to each member of the delegation staff for visiting Azerbaijan in such a sensitive period for our country.  It has been noted that the relations between our states as one nation and two states are unique in the world. Our language, religion, culture, the values you share, as well as our successes and grief are the same.

The speaker has extended condolences on her own behalf, on behalf of MPs and on behalf of our people to the families and closed ones of those who died as a result of the earthquake in Turkey and said that Azerbaijani people share their grief.

The Speaker of the Milli Majlis spoke about the counter-attack operations carried out in the Nagorno-Karabakh region of Azerbaijan after the next provocation by Armenia on September 27, at the meeting. The speaker noted that keeping 20% of our lands under occupation for 30 years, Armenia repulsed to implement the resolutions of the UN, the decisions of prestigious international bodies regarding the conflict during these years: “The activities of the Minsk Group, which is engaged in resolving the problem, have not yielded any results. Now Azerbaijan itself liberates its lands from the occupiers. We express our gratitude to the state and people of brotherly Turkey for political and moral support in this issue.”