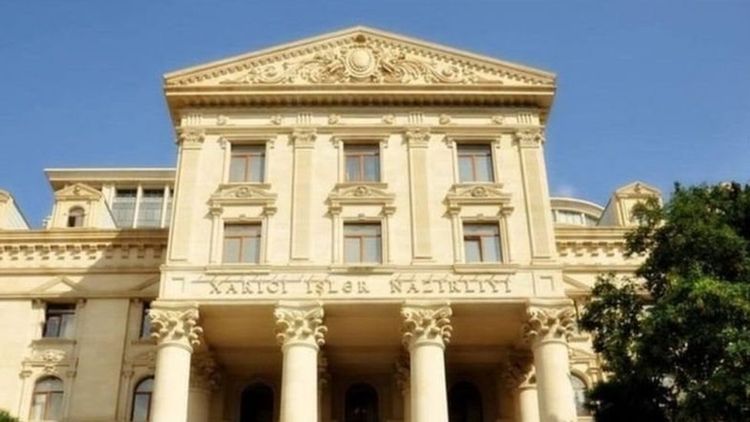 The Press Service Department of the MFA of the Republic of Azerbaijan has commented on the statement made by the Foreign Minister of Armenia during the press briefing on 16 October 2020, APA reports.

The statement made by the Minister of Foreign Affairs of Armenia during the press briefing with the Foreign Minister of Greece, and his attempts to accuse Azerbaijan and Turkey of the escalation in the region is another vivid example of the hypocritical policy of Armenia, a country pursuing the policy of aggression against Azerbaijan.

We remind the Armenian Foreign Minister that the Armed Forces of Azerbaijan are defending the civilians of Azerbaijan and taking counter-offensive measures in accordance with the right of self-defense on the sovereign soil of the Republic of Azerbaijan. The armed forces of Armenia have been illegally present in the territories of Azerbaijan nearly for three decades pursuing the goal of consolidating the consequences of the occupation policy of Armenia.

The recent act of new aggression by Armenia against Azerbaijan, its continued direct and indiscriminate attacks against the Azerbaijani civilians, a blatant violation of the humanitarian ceasefire by Armenia, including the rocket firing the peaceful population and cities of Azerbaijan situated far away from the conflict zone causing serious civilian causalities, clearly demonstrate that Armenia is not interested in the political settlement of the conflict, on the contrary, it aims to involve third parties to hostilities. Otherwise, how would Armenia explain the targeting of the Azerbaijani towns from the territory of Armenia?

It is utterly deplorable that Armenia instead of respecting the norms and principles of international law, particularly the inviolability of internationally recognized borders of the states and implementing the demands of the UNSC resolutions on full and unconditional withdrawal of the occupying forces from the occupied territories of Azerbaijan, prefers to prepare for new aggression under the disguise of the ceasefire.

The leadership of Armenia is responsible for the latest heinous attacks directed at the peaceful population of Azerbaijan, killing 47 civilians and injuring 222. Foreign Minister Mnatsakanyan should know that these attacks amount to war crimes under international law and incur individual criminal responsibility of the perpetrators.
Armenia should stop blaming others for escalation in the region and start withdrawing its forces from the occupied territories of Azerbaijan, and engage in a good faith in substantive negotiations for resolving the conflict and ensuring peace in the region.