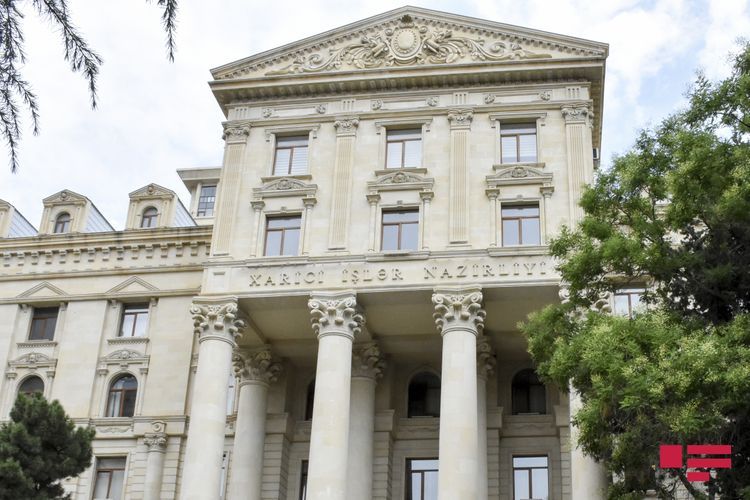 Press Service Department of the Ministry of Foreign Affairs of the Republic of Azerbaijan has released a statement on the occasion of International Day to Protect Education from Attack, Foreign Ministry told APA.

"September 9 is the International Day to Protect Education from Attack in accordance with the Resolution 74/275 of the United Nations General Assembly adopted on May 28, 2020.

The Republic of Azerbaijan, being a party to the Convention on the Rights of the Child and its Optional Protocol on the Involvement of Children in Armed Conflict, as well as to the 1949 Geneva Conventions for the Protection of War Victims, has strongly and consistently supported international efforts aimed at ensuring effective protection for the rights of children and improving the situation of children affected by armed conflict.

The ongoing armed aggression of Armenia against Azerbaijan has inflicted serious damage upon the education infrastructure of Azerbaijan. 1107 educational facilities and 855 kindergartens in the occupied territories of the Republic of Azerbaijan were totally destroyed.

As a result of ethnic cleansing policy, all Azerbaijanis, including schoolchildren, students and teachers have been expelled from their native lands in Armenia proper and the occupied territories of Azerbaijan. Tens of thousands Azerbaijani refugee and internally displaced boys and girls continue to realize their right to education under the shadow of serious challenges stemming from their continued displacement.

Many others along the line of confrontation attend their classes under the constant threat of being attacked by indiscriminate shelling of armed forces of Armenia, despite formal ceasefire. Thus, as a result of heavy indiscriminate shelling of armed forces of Armenia in April 2016 alone, many schools in the Goranboy, Tartar, Aghdam and Aghjabedi districts of Azerbaijan were seriously damaged, the secondary school of the Sarijaly village of the Aghdam district attended by 220 schoolchildren was destroyed.

While joining the international community in marking September 9 as the International Day to Protect Education from Attack, we underline Armenia’s responsibility for war crimes it has committed with regard to Azerbaijani schoolchildren. In the context of realization of the vision of this remarkable day, we underline the utmost necessity of ending the impunity for the above-mentioned crimes through bringing all perpetrators into justice.

Armenia must implement the demands of the four resolutions of the UN Security Council 1993 (822, 853, 874 and 884) to enable tens of thousands Azerbaijani children to realize their right to education in safety. Azerbaijan counts on support and solidarity of the international community, in this regard," said Foreign Ministry.