Hikmet Hajiyev: Another evidence of the illegal settlement policy pursued by Armenia in our occupied territories for many years, emerged 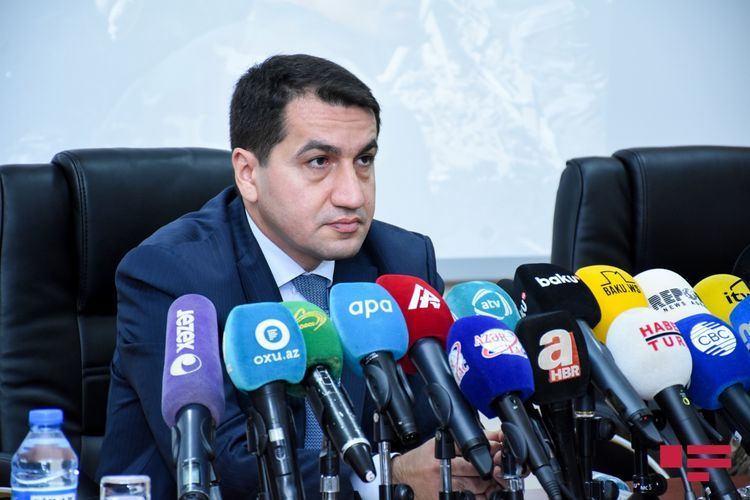 "Armenia has always pursued a policy of strengthening the status quo based on occupation and annexing Azerbaijani lands. For this purpose, a policy of illegal settlement has been pursued in the occupied Azerbaijani lands. Thus, Armenia has grossly violated international humanitarian law, including the 1949 Geneva Conventions, and committed war crimes," said Hikmet Hajiyev, Assistant of the President of the Republic of Azerbaijan, Head of Foreign Policy Affairs Department of the Presidential Administration, APA reports.

Aide to the President noted that the fact-finding missions of the OSCE sent to our occupied territories in 2005 and 2010 also confirmed Armenia's policy of illegal resettlement: "The mission's report said that illegal settlements in the occupied territories were detrimental to the resolution of the conflict and should be prevented. The placement of an Armenian family from Lebanon in Shusha in September of this year was covered in detail through the Armenian media and social networks. Recently, the Russian branch of the BBC prepared a report on the settlement of 300 Lebanese Armenians who were illegally relocated to our occupied territories.

The President of the Republic of Azerbaijan, Mr. Ilham Aliyev, during his speech at the 75th session of the UN General Assembly on September 24, once again drew the attention of the international community to Armenia's illegal settlement policy.

Unfortunately, despite the legitimate remarks of our country based on international law, the international community, including the co-chairs of the OSCE Minsk Group, did not react to the policy of illegal settlement and turned a blind eye to the situation. Encouraged by such an approach and impunity, Armenia continued its policy of illegal settlement."

Mr. Hajiyev emphasized that numerous war crimes of Armenia are revealed one by one as the brave Azerbaijani Armed Forces liberate our lands from the occupation: "During the inspection of the building used by the National Security Service of Armenia in Zangilan region, some documentary materials were found. The materials included a list of Syrian citizens and copies of passports. It was found out that 60 Syrian Armenians named in the list (19 families in total) were relocated to the Zangilan region during the illegal settlement process carried out by Armenia in the occupied territories.

Thus, further evidence of the illegal settlement policy pursued for many years in our lands occupied by Armenia has emerged. We are confident that the number of such pieces of evidence will increase as our new territories are liberated.

Unfortunately, recently there have been deliberately spreading false reports on the Azerbaijani side about the alleged fight of armed mercenaries. However, in the presence of concrete evidence, no statement is made about Armenia's illegal settlement policy in the occupied territories of Azerbaijan.

We expect the world community, especially the OSCE Minsk Group co-chairs, to react to such facts."