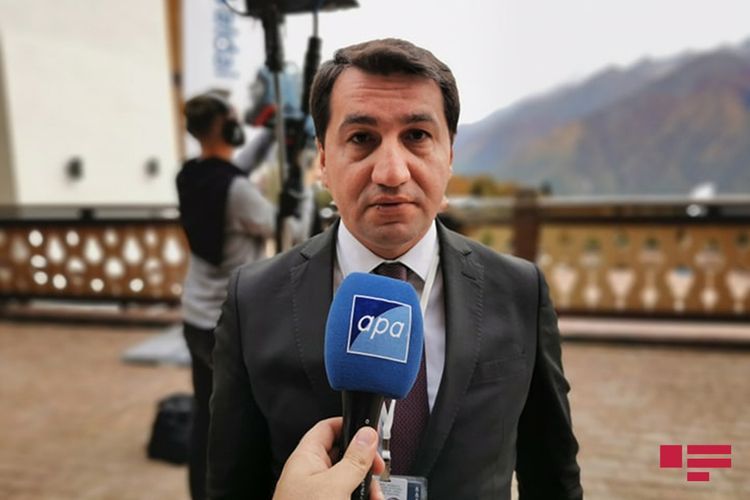 According to him,  Armenian side tried to change the format of the negotiation process.

"We have already established the format of the negotiation process. Armenia and Azerbaijan are conflict parties and OSCE Minsk Group Co-Chairs are mediators. Then the Armenian side at the very high level said that new territories are new wars, no inch of territory back and finally Armenian PM in occupied Khankendi city of Azerbaijan said that Nagorno Garabagh is Armenia. It is pure annexation of the territory of sovereign state at the level of leadership of one country against another one. It is completely unacceptable. It was an element of not just undermining, destroying the entire negotiation process. We have communicated with a message to co-chair countries to international community Nagorno Garabagh is Azerbaijan and exclamation," Azerbaijani President's aide stated.

"We have taken positive note about the EU's principled and firmed position with regards to territorial integrity and sovereignty and inviolability of internationally recognized borders of Azerbaijan. Particularly it has been reaffirmed in the partnership priorities document that has been signed between EU and Azerbaijan. And we also see a continuation of this policy, especially in the implementation of common foreign and security policy document of the EU that has been endorsed in the Parliament of the EU is a bounding principle that says that EU supports the territorial integrity of all Eastern partners. For us, it is critically important and we appreciate that position and we do think that with core fundamental principles deriving from the Helsinki Final Act and international law should be on non-selective manner to be applied to all conflicts and include the respect to all Eastern Partnership countries and we would like also to see further continuation of this policy and seeing also reflected in EU position in some other different forums as in OSCE, UN. Because territorial integrity is a must for every and each country," Hikmet Hajiyev stated.