Ilham Aliyev: Unfortunately, their coverage of the events is only from Armenian side 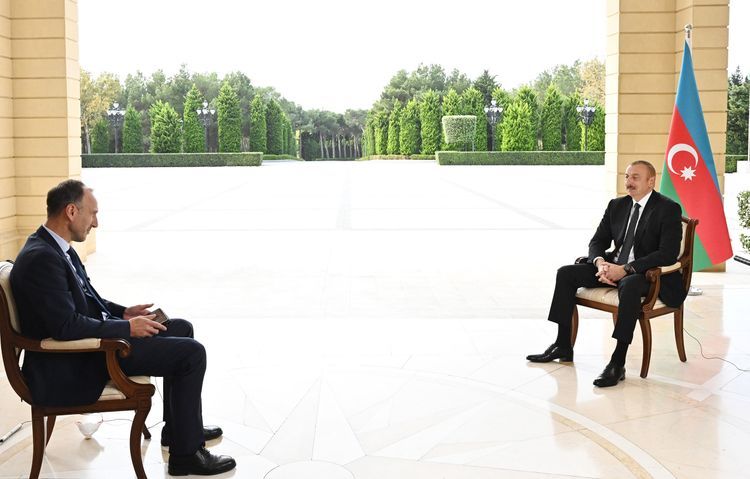 "We don’t use. We defend ourselves. We invited Amnesty International and Human Rights Watch to come to Azerbaijan. Unfortunately, their coverage of the events is only from Armenian side. They did not approach us to come here, therefore, we have big doubts about their impartiality," said President Ilham Aliyev.

"They are coming because we said “why don’t you come here?” After we made a request to them. “Please, do come here”, they agreed to come. But why didn’t they come in the first place?" said President answering the question, "They told me that they wanted to come. They asked for several times, but you didn’t give them access."

"No, no. That is not possible. Because that was what we did. Just yesterday we said, why they don’t come, let them come and go to Ganja, go to Tartar, meet the people whom Armenians attacked. And again, the ballistic missile launch is seen from the satellite. No one can say that we launched a ballistic missile on any civilian compound in Nagorno-Karabakh or in Armenia," added Azerbaijani President.

Ilham Aliyev noted that Human Rights Watch and Amnesty International was very aggressive against Azerbaijan: "They never made any comment about violation of human rights in Armenia. When a journalist died in Armenian prison they were silent. When leader of main opposition party of Armenia was jailed, they were silent. When former presidents are on trial, they were silent. They don’t want to see it, because they have the so-called Armenian origin people in their structures. And these organizations are basically used in order to damage the image of Azerbaijan. But nevertheless, we invited them. Let them come. And say what they see."