Ilham Aliyev: Why should a person born in Armenia fight against us on Azerbaijani soil? 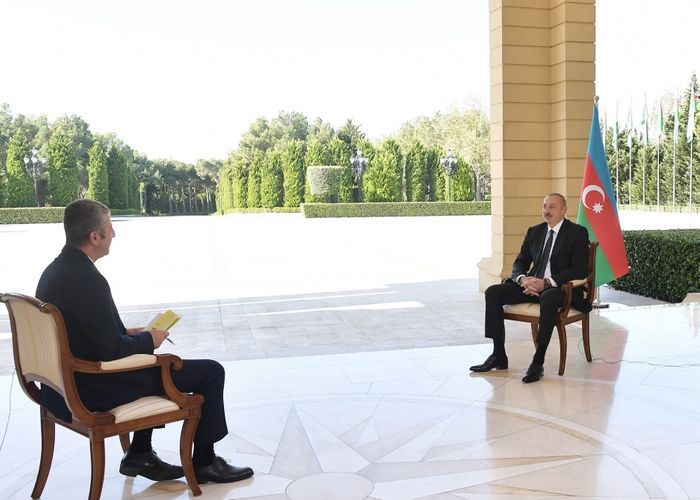 "Basically I have nothing to say to Pashinyan. We have met many times. Two years ago, in our first contacts after he came to power, I think we had a very good conversation. I had hopes that he, as the new prime minister, would introduce amendments and changes to Armenia’s aggressive policy and understand that as long as this conflict remains unresolved, peace will not come to this region," President of the Republic of Azerbaijan Ilham Aliyev has said in an interview to CNN-Türk television on October 7, APA reports.

"As a person who came to power as a result of a coup and made big promises, he will not be able to fulfill them because if the relations between Azerbaijan and Armenia are not normalized. And then there is no need to talk about the economic development of Armenia. I was hoping that he understood this and the first messages from Armenia were very positive. We showed restraint, taking into account their request, and strengthened the ceasefire. It is possible to say that the ceasefire was rigorously observed in the last two years. The Minsk Group co-chairs also noted this in their statements. But what happened next? We realized that he deceived us. I think that this is a very wrong path in politics. You can't lie. Our words do not differ from our deeds. But the words given to us turned out to be a lie. His words that “Karabakh is Armenia, full stop” actually put an end to the negotiations. After that, there were other provocative statements, including such that Azerbaijan should negotiate with Nagorno-Karabakh, i.e. the so-called “Nagorno-Karabakh republic”. This was a blow to the format of the negotiations. Not only we but also the Minsk Group opposed this. Then in July, they carried out a military provocation in Tovuz, in August they sent a sabotage group and last month they already carried out a large-scale offensive. Therefore, I have said everything to him. Addressing the Armenian people, I want to say that they should hold their government accountable, demand that it stop the fire, end the occupation, not send their children to war, do not send them to Azerbaijan because the so-called “army of the Nagorno-Karabakh republic” consists of citizens of Armenia by 90 percent. In other words, there is no such thing as the “army of Nagorno-Karabakh”. Why should a person born in Armenia fight against us on Azerbaijani soil? Therefore, I want to tell the Armenian people that the Armenians live in peace today and will continue to live in Azerbaijan. The Azerbaijani state is doing everything possible for their normal life. I want to tell the Armenian leadership: the sooner you leave the occupied lands, the better it will be for you," said head of state.