No point in continuing the activities of the OSCE MG Co-chairs, Igor Korotchenko says 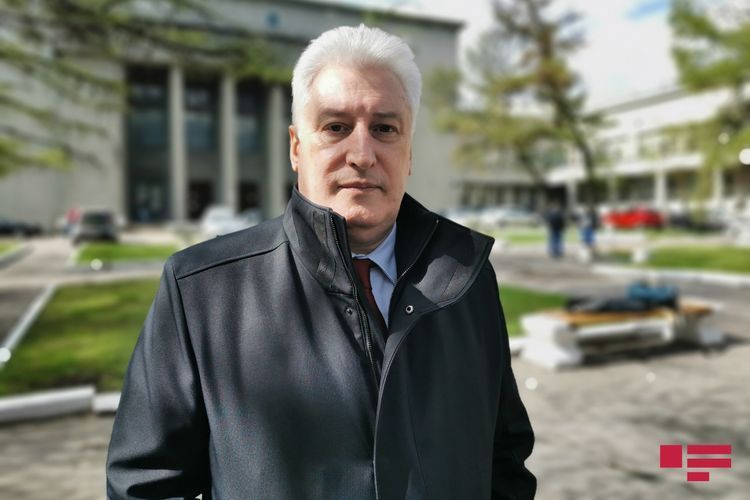 “Unfortunately, Armenia does not give up its provocative actions. The border incident that happened some time ago was of local nature and was averted thanks to the restraint of the Azerbaijani Army. In principle, this provocation of Armenia could lead to a real clash. And the Armenian propagandists started shouting that they were supposedly not to blame for this incident.”

Chief editor of the Russian National Defense magazine Igor Korotchenko said this in an interview with APA's Moscow correspondent.

"Macron behaves not like the president of France, but like the head of the Union of Armenians of France"

According to him, the Armenian army is in a demoralized state: “Cases of interceding on combat duty in a state of alcoholic intoxication in the Armenian army are a reality. With weapons in hand, different incidents are expected. This situation can lead to human losses, and most importantly, to full-scale military clashes where peace should be preserved. I say again that the events taking place in Armenia cause great concern and concern. We are witnessing a sudden activation of destructive forces in Armenia.

In a number of countries, we see the activation of the representatives of the Armenian diaspora, who are trying to influence the policies of the countries. On the eve of early parliamentary elections in Armenia, along with the forces expressing healthy ideas, we see the activation of radical forces. These forces, which actually serve the ideas of fascism, are striving to get into the Armenian parliament. The goal of these forces is to realize their fascist ideas as a state policy after coming to power.

It is unacceptable. Unfortunately, our partners in the anti-Hitler coalition do not react in any way to the situation with the transformation of the ideas of fascism into state policy in Armenia. Today French President Macron is behaving not like the President of France, but like the head of the Union of Armenians of France. It is clear that he has a political and personal position. But Macron must speak on behalf of the entire French people, and not on behalf of the French, who are Armenians by nationality.

Look, Paris did not protest against the erection of a monument to the fascist Garegin Nzhdeh in Armenia, although France was a member of the anti-Hitler coalition and made a significant contribution to the destruction of fascism and Nazism. Now it turns out that the French president has buried his head in the ground like an ostrich, does not see the facts of the glorification of fascism and Nazi criminals in his beloved Armenia. You know, in this matter you need to be consistent and specific. There is sympathy, there is antipathy. However, there can be no “or” in assessing the heroism of fascism and the revival of Nazism. This is a red line. Either you support fascism, or you condemn it, there can be no half-heartedness here.

The Russian military expert also commented on the French side's statement after a telephone conversation between Putin and Macron this week that “Macron and Putin will soon develop new initiatives within the OSCE Minsk Group to resolve the Nagorno-Karabakh conflict”: “Nagorno-Karabakh is Azerbaijan! Therefore, on the territory of Azerbaijan, there should be no separatist organizations, structures parallel to the government, illegal Armenian armed formations, and Armenian soldiers. Macron is still trying to play on the side of Armenia. I think the issue of the status of Nagorno-Karabakh has been resolved. Everything is clearly reflected in the tripartite statement. Now it is necessary to force Armenia to fulfill the conditions of the trilateral statement. Therefore, attempts to revive any political process, attempts to recognize the independence of the already de facto non-existent separatist regime in Karabakh are part of a dirty political game. Russia does not participate in these games. The Kremlin has clarified the essence of the talks between Putin and Macron. This information, disseminated by the French side, is nothing more than a dream of Armenian lobbyists, passed off as reality."

I. Korotchenko also expressed his attitude to the revitalization of the West and Armenia in striving for the revival of the OSCE Minsk Group co-chairs: “What role can the Minsk Group play today? Azerbaijan won the war. What negotiations, what status of the separatist regime can we talk about? Events have progressed too far. We are currently living in new geopolitical realities. These new realities are that Azerbaijan has restored its territorial integrity, sovereignty over the regions that were under the occupation of Armenia for about 30 years. To be honest, I see no point in continuing its activities by the OSCE Minsk Group. Let's see what they can discuss. For example, they can hold a meeting of the Minsk Group countries and put pressure on Armenia to provide Azerbaijan with maps of minefields. It would be good if the Minsk Group put forward this initiative. Otherwise, reviving the dead "NKR" is not good. These are dirty political games. Today, the main task of the Minsk Group co-chairs is to discuss the terms of Armenia providing Azerbaijan with a map of minefields. This should be on the real agenda of the Minsk Group co-chairs, because people are dying. The mines planted by Armenia on the territory of Azerbaijan are blown up and killed by civilians, citizens of Azerbaijan, and Russian military personnel. This is what the Minsk Group co-chairs should do. For some reason, we do not hear anything from President Macron in connection with the fact that the maps of minefields have not yet been provided to Azerbaijan, we do not see that the European Parliament condemns Armenia for this. Why are they silent? They raise a fuss about other issues, but they remain silent on this issue. This is a policy of double standards."