OSCE Chairperson-in-Office: “In order to successfully prevent and resolve conflict and to ultimately achieve a sustainable peace some conditions must be met” - INTERVIEW 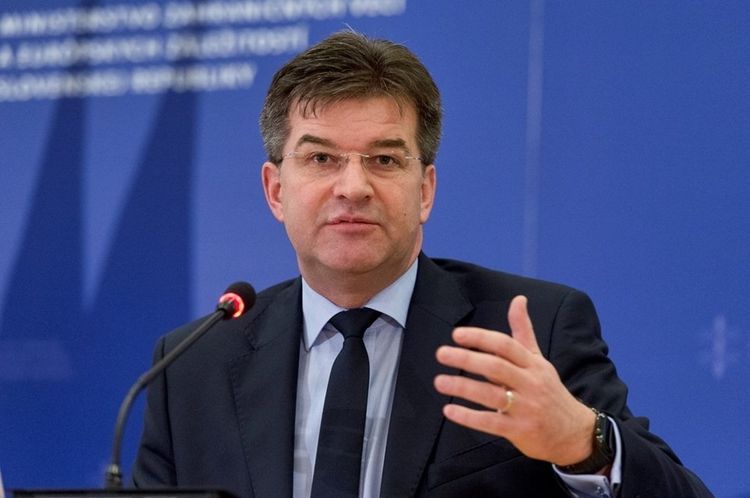 – On the occasion of the opening of the Embassy of the Slovak Republic in the Republic of Azerbaijan, you will visit Azerbaijan. Mr. Minister, I would like to ask your point of view on the contribution of the Embassy to the relations between the two countries, Azerbaijan and Slovakia in future.

– The Slovak diplomatic presence in Azerbaijan is an important step forward to strengthen the ties between our countries and we have high expectations from opening a Slovak Embassy in Baku. We hope that the embassy through its daily work will contribute to further building up our relations in many different ways, such as intensifying  political dialogue, assisting to build a legislative basis for our cooperation in a more systematic way, initiating inter-governmental agreements, arranging high-level visits, organizing business-to-business contacts and looking for new platforms of cooperation. And of course, we would also like to bring our peoples closer together. Therefore, we are looking at identifying concrete ways how to establish those contacts in areas such as economy, education, healthcare, sport and other fields of mutual interest.

– Mr. Minister, how do you evaluate the current state of relations, are you satisfied with the level of ties between both countries?

– Over the last years, the Slovak – Azeri relations have seen a growing number of high-level visits. And I think it is a testament to our mutual interest of developing closer ties and more economic cooperation. Let me mention a few of them: in November 2018 the Slovak Premier Minister Mr. P. Pellegrini visited Baku with an entourage of 26 Slovak businesspeople, who also participated in a B2B Business Forum. This year, in March, I have visited your country in my capacity as OSCE Chair for 2019. And this July, the Slovak Deputy Prime Minister and Minister for Investment and Information, R. Raši, participated in the European Youth Olympic Summer Festival and he also met with your President. I consider these visits very important as visiting each other on a higher political level creates a platform of mutual understanding and helps to identify common interests.  In the future, we should build on this promising development between our two countries and transform political support on both sides into concrete results in our economic cooperation and business activities. Our Embassy in Azerbaijan will play an important role in better coordinating our efforts.

– What is your approach, how could be achieved further development in political and economic relations?

– As mentioned before, the political context of mutual support is a prerequisite to further improve our relations. With no unsolved bilateral issues, we would like to pursue our shared wish to broaden our cooperation, especially on the economic front. We need to approach it more systematically and develop effective mechanisms and the legal basis for our everyday work that will ultimately produce tangible results. This means we have to initiate activities among small businesses, explore investment opportunities and participation in infrastructure projects with government support and find new models of business interactions. This should be a joint endeavor of our two countries. And we firmly believe that this will be strengthened by opening our Embassy in Baku, as well as by opening your Embassy in Bratislava, which we expect for the next year.

– Mr. Lajčák, your position as OSCE Chairperson-in-Office is going to complete at the end of this year. In this context, how do you assess the entire activity of Slovak Chairmanship?

– Let me start by stressing that I am visiting Baku as the Foreign Minister of Slovakia. But regarding your question: The Slovak OSCE Chairmanship is truly an important and memorable endeavor for Slovak diplomacy. We have organized a number of visits, conferences, and meetings aimed at improving the situation of people on the ground, promoting dialogue, and ensuring stability in the OSCE region. The Slovak OSCE Chairmanship has shown strong support for the OSCE’s work and promoted the relevance of the organization with all international partners. We strongly believe in the one highlight remains ahead of us: we will host the OSCE Ministerial Council in Bratislava on 5-6 December 2019. And I hope that at this meeting all participating States will be able to agree on the way forward for our organization. Looking back at what I have seen, heard and learned over the year, I would say we need to strongly advocate for and show political will, to implement our existing commitments, to continue the open dialogue and to build trust.

– This is the undeniable fact that the OSCE region suffers conflicts, going more specifically I would like to ask about Nagorno Karabakh conflict. How has the OSCE Slovak Chairmanship contributed to the peace-building process between Azerbaijan and Armenia?\– You are very right. The OSCE region suffers from ongoing conflicts, and effort to manage and resolve them – and, in particular, to mitigate their impact on conflict-affected populations – have been at the top of the agenda for our Chairmanship. Regarding Nagorno-Karabakh, as the OSCE Chairperson-in-Office, I visited both Baku and Yerevan. I talked to leaders and other important actors. I maintained active communication with my counterparts – the foreign ministers of Azerbaijan and Armenia. And my Personal Representative, Ambassador Andrzej Kasprzyk, has remained central to our efforts to support a peaceful, negotiated on a daily basis.  The Minsk Group Co-Chairs have been quite active this year, as well, and I have met with them frequently; they have my full support.

– Mr. Minister, during Slovak Chairmanship, the importance of confidence-building measures, people to people contacts have many times been emphasized. What do you think, to what extent these calls have been followed and these measures implemented?

– The concept of “preparing populations for peace” originated in the Minsk Group process, but that concept is applicable across all conflicts in the OSCE area. In order to successfully prevent and resolve conflict and to ultimately achieve sustainable peace some conditions must be met, and trust and confidence between the sides are certainly among the most important. For example, at the beginning of the OSCE Chairmanship, I identified several confidence-building measures for eastern Ukraine, and now I can say that thanks, in part to the work of the OSCE, the bridge in Stanytsia Luhanska has been repaired and people are using it.

– Our Chairmanship is focused on people, dialogue, and stability – and particularly to improving the lives of people directly affected by conflict. The issue of Internally displaced persons and refugees is very important to conflict resolution, and not only in the South Caucasus region.

– The Ministerial Council will be a highlight of our Chairmanship, and the work of the whole organization and its participating States will be assessed based upon the outcomes of our meetings in Bratislava. I believe the ministers of foreign affairs from Armenia and Azerbaijan have confirmed their participation, and as Chairperson-in-Office I will do everything I can to support their ongoing efforts in the framework of the Minsk Group process.