Pakistani FM: Pakistan have always been and will be with the brotherly nation of Azerbaijan and supports its right of self-defense - UPDATED 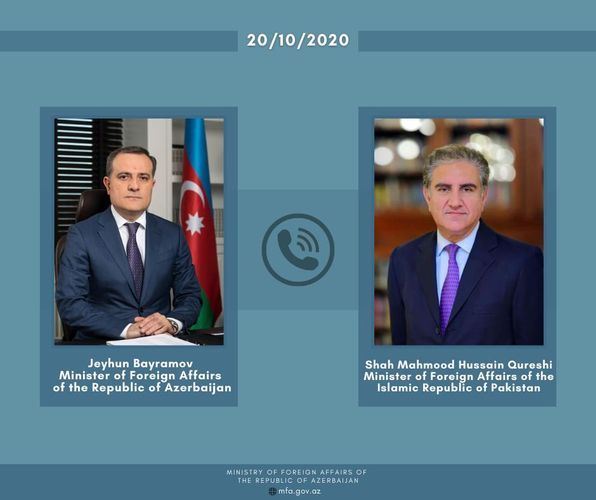 The Ministers discussed the current situation in the region.

Minister Jeyhun Bayramov informed his Pakistani colleague on the violation of humanitarian ceasefire by the armed forces of Armenia, including intensive shelling the Azerbaijani civilians and residential areas. Minister emphasized that missile attacks on Ganja city which caused serious civilian casualties are war crimes and crimes against humanity and Armenian leadership bears full responsibility for these crimes.

Minister highly appreciated the firm support of brotherly Pakistan to the just position of Azerbaijan.

Minister Makhdoom Shah Mahmood Qureshi underlined that the people of Pakistan have always been and will be with the brotherly nation of Azerbaijan and supports its right of self-defense. He stressed that Pakistan is for the settlement of the conflict based on the territorial integrity of Azerbaijan within its internationally recognized borders and in accordance with the UN Security Council resolutions.

The Ministers also discussed the other issues of mutual interest.

A telephone conversation has been held between Ministers of Foreign Affairs of Azerbaijan and Pakistan Jeyhun Bayramov and Shah Mehmood Qureshi, Pakistani Ambassador to Azerbaijan Bilal Hayee wrote on Twitter, APA reports.