President Ilham Aliyev: "All three violations of ceasefire were committed by the Armenian side" 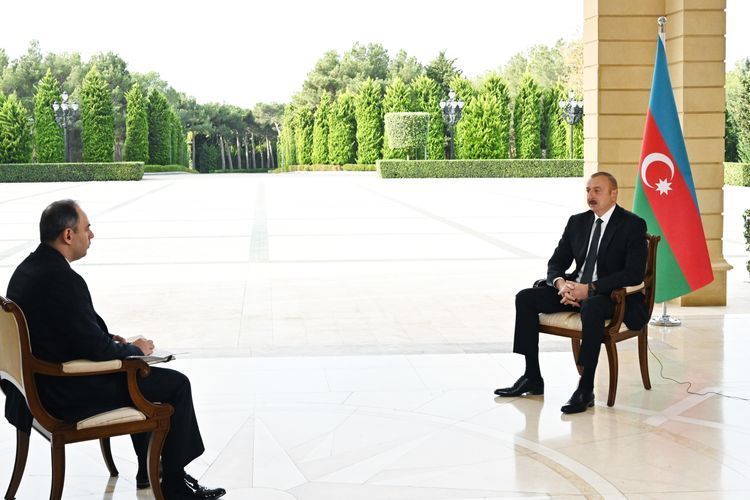 "We need the Armenian side in the person of its leadership to undertake a commitment to withdraw troops from the occupied territories. We haven't heard that yet. As soon as this commitment is made by the Armenian leadership and as soon as it is confirmed and approved by OSCE Minsk Group co- chairs, we are ready to stop military action immediately. And provided that the Armenian side also stops it because all three violations of the ceasefire were committed by the Armenian side. Four civilians, including a seven- year- old girl, were killed as a result of a cluster missile attack on Barda yesterday," said President of the Republic of Azerbaijan Ilham Aliyev in his interview with Russian Interfax agency on October 28, APA reports.

"This is not a conflict zone. So this is a flagrant violation of the ceasefire, which was agreed in Washington. Prior to that, the ceasefire agreed in Moscow was violated by the Armenian side the next day when they launched a ballistic missile from the territory of Armenia to Ganja. And as a result of this, 10 people died. As a result of the second ballistic missile attack on Ganja, even more people died. There are about 30 victims in a peaceful city. Therefore, it is not our fault that the ceasefire is not observed. Therefore, the Armenian side must undertake that they will withdraw from the occupied territories they are still holding under occupation: these include a part of Aghdam district, the entire Lachin district and most of Kalbajar district. And then we will be ready, of course, to move on to a political settlement. It will cover many aspects. In principle, we have accepted the fundamental principles, while the Armenian side has rejected them. But the Armenian prime minister’s aggressive statement yesterday suggests that they say one thing to the mediators and do something completely different," the head of the state noted.