President Ilham Aliyev: "We proved them who is who" 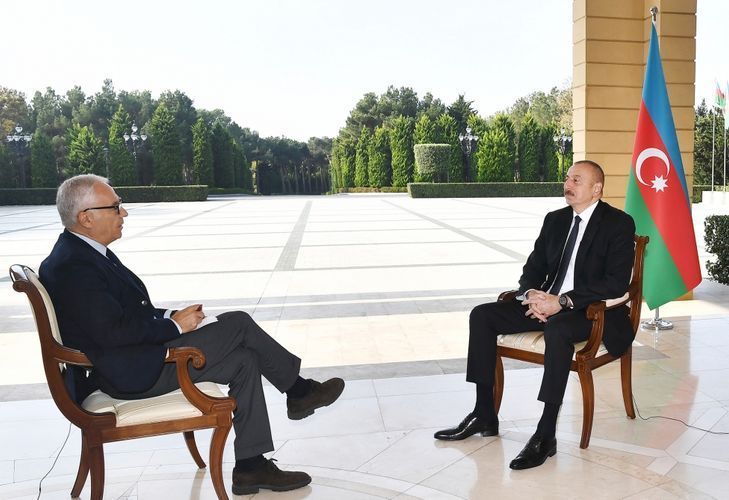 "On many occasions I already during this time, more than one month, referred to this issue and said that this is not true. This is not correct information. I don’t know why this information was circulated, and still is circulated," said President of the Republic of Azerbaijan Ilham Aliyev while answering the question "What can you say about the jihadists’ presence that president Macron, Russian foreign minister denounced that they are fighting against Armenia with your army. Is it true?" on November 2 in an interview with the Italian La Repubblica newspaper, APA reports.

"First, we haven’t been provided with any evidence, any proof about that. All were words, and those words were articulated in the early days of the conflict. And you referred to President Macron’s statement about that. That was only in the first days of the conflict. Since that time, we didn’t hear these kind of statements. So this is first. No proofs no evidence. Second, no need. Many times I said we have an army of a 100 thousand fighters, a regular army. We can mobilize several times more if we announce the total mobilization. We have modern weapons. We have a sophisticated technology. And we have a very high moral spirit. Therefore, there is no need for that. But unfortunately, what happens on the other side is being ignored. We already have enough evidences about foreigners fighting on Armenian side. They say they are native Armenians but first, it does not make any difference, because if foreign citizen is fighting against one country against another, it is a mercenary. Then, we do not have a 100% evidence that all of them are Armenians. We know that there are others. We know that PKK is there, we know that some terrorists from the Middle East joined the so-called “army of Nagorno-Karabakh”. Therefore, unfortunately, this issue is absolutely out of picture. So, it creates an impression of a deliberate political attack on Azerbaijan. Plus, why Armenians are also exploiting this false statement, because for them probably it is very painful to admit that we beat them on the battlefield. For 30 years, they have been pretending that they have an unbeatable army. For 30 years they were telling that they on their own occupied our territories. Though, we know that it was wrong. So, we proved them who is who. We proved that their so-called “unbeatable army” is a legend, is a mythology. And for them to admit it is very painful. But they have already admitted their defeat. Prime minister Pashinyan sent a letter to President Putin asking for a military help. This is an admitting of their military defeat and our victory," the head of the state noted.