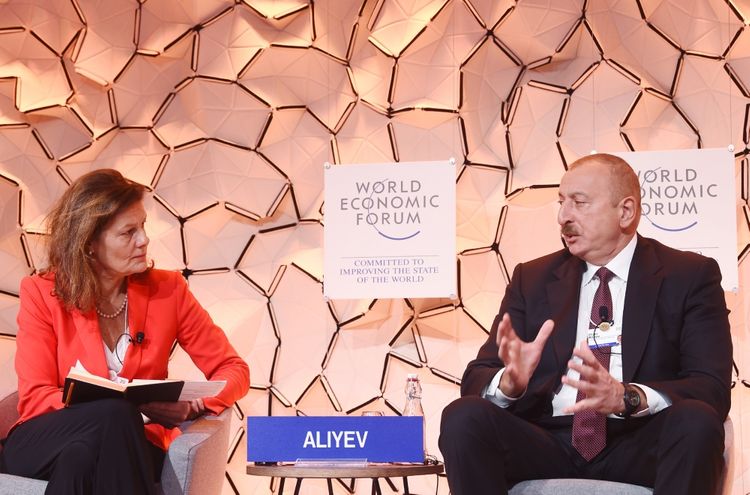 President of the Republic of Azerbaijan Ilham Aliyev has attended a panel discussion on “Strategic Outlook: Eurasia” held as part of the World Economic Forum.

The head of state responded to moderator's questions.

President of the Republic of Azerbaijan Ilham Aliyev.

As we said, Eurasia has now these great super-powers, Russia and China on each side. As President of Azerbaijan who do you call first-Moscow or Beijing?

President Ilham Aliyev: Yes, our policy is friendly towards our neighbors, but at the same time our national interests first. Therefore, all the achievements which we enjoyed during the years of independence we achieved due to the commitment of our people to our independence and the fact that we have managed to implement very serious reforms in political and economic area. Our achievements are also reflected in Davos World Economic Forum’s annual assessment. We have very high level of development in infrastructure, and as far as roads construction and quality of roads is concerned we are number 27 in the world.

Moderator: Fantastic, I was interested to see that you have refreshed your government. You have brought in young technocrats.

President Ilham Aliyev: Yes, exactly the government was changed. New people were invited to the government, well educated, with more than vision, because as I said publicly many times in 21st century we cannot achieve success with the vision of 20th century. Therefore, the new people we brought not only to the government, but also to the Presidential Administration, which also was changed largely and next month we will have early parliamentary elections. The aim of that was also to give opportunity to people to select those people whom they trust, and the parliament I am sure after election will be important part of the continuation of the reforms.

Moderator: For Azerbaijanis who want their lives to get better, what do you hope this new government will deliver to them. What will they see over the next year or two that that’s different?

President Ilham Aliyev: I think that in the previous times we largely invested into infrastructure project, therefore, today, with respect to access to electricity, according again to Davos Forum, Azerbaijan is number 2. Gasification level in Azerbaijan is 96 percent, we have built 16 thousand kilometers of roads and more than 3000 schools and 700 hospitals. But that was part of the state investment. What we need now, we need new approach in the governance, good governance, transparency, accountability, bringing the criteria of our life and living standards closer to the standards of European Union. And I think this is possible, this is achievable, because we have a strong political support. Again I want to come to the assessment of Davos Forum which ranks Azerbaijani government's strategic vision as number 10 and government’s ability to provide stability number 11 in the world. So, the new government will concentrate on major challenge, which is growing population. Therefore, our economic growth must be in line with growth of population. During the time of independence we came from seven million to ten million people. So, it needs additional infrastructure. It needs additional food supply, and our population grows every year more than hundred thousand that means we need at least hundred thousand jobs, annually and it is not easy. Therefore, the government will address that. We will try to keep poverty as low as it is today, it is below 5 percent. And also we have a long strategy of reduction of the foreign direct debt, which is today very low, it is 17 percent of GDP but our target is to bring it down to 10 percent of GDP. And of course, keeping inflation low, as it was last year 2.5 percent, and income of people must always be ahead of inflation as well as job creation must be ahead of demographic growth.

Moderator: I read that a third of the population of the Central Asia is now under 15, that’s one third of the population under 15. If we look at youth in every other continent of the world, we see them on the streets, they are demanding more voice, they are used to having more voice. You have just explained that in your country a growing number are those young people. What would you say, if they want to come out on the streets and demand more voice?

President Ilham Aliyev: We will listen to what they want but the fact is that in Azerbaijan youth is not in the streets, youth is in the universities, at school, youth is in the start-up business, youth is actively involved in governmental issues. We have launched a very huge volunteer movement, and tens of thousands of people have been trained in the public services sector as volunteers and then, we recruit these people, those who have good results, the governmental institutions. Frankly speaking when we see in different parts of the world youth on the streets it is because of dissatisfaction. Dissatisfaction with the life, they lost trust in their governments. The governments use populistic slogans to come to power, and then, cannot deliver what they promised. Actually they lie, and the main reason for that is irresponsibility of politicians. Because we see in many countries not only in Europe but in other places that one government comes, immediately the head of government is under fire. People elect him or her and then within one year he or she loses all the credibility. That is because the promises were given which were not been possible to implement. In Azerbaijan we always keep our word, we never say something we cannot deliver and year after year living standards of our people is better.

President Ilham Aliyev: I don’t think so, I think the main idea and the main ideology of Azerbaijan, including the young generation is sovereignty, independence and reliance on our own resources. And me as the president one of my targets was to transform Azerbaijan into a self-sufficient country. The country does not depend on anyone. In other words, economic independence was the main priority because this is a foundation for political independence. Of course, different countries have different agenda, economies of different countries is more vulnerable than others. As far as Azerbaijan is concerned once again, our geographical location is very advantageous, plus we invested largely into creation of modern infrastructure. Second, as you mentioned our generation is very young, and we have extra labor resources and very creative. Of course, we are rich in natural resources, oil and gas, which create energy security for us, Therefore, our relations with our neighboring countries and the big number of partners are based on mutual interest and plus in every issue related to our presence in that or other international body we look at the pragmatic side. What will it give to us? If it gives us more economic incentives more opportunities for business, more stability, more security, of course, we are considering that. We are members of a number of international institutions. One of them is the Non-Alignment Movement.

Moderator: What is your bright hope or your worst nightmare for the region, President Aliyev?

President Ilham Aliyev: I think the most important now, especially taking into account the regional situation and new emerging conflict zones is the regional stability. We don’t have internal risks in the country whether its political risks or economic risks country is stable, development is sustainable. We have a very broad agenda of reforms which in the face of implementation which will create better opportunities for our people. The main concern and the main potential nightmare would be aggravation of tension beyond our borders. And for that, unfortunately, we are not responsible, and we cannot to full degree influence that process. Responsibility lies on the super powers, on the big powers which must agree on certain issues between themselves so that this fragile stability is not shaken more.

Moderator: And for those in the room who don’t know the region well what are the tensions that you most worry could flare up?

President Ilham Aliyev: You know, we see those tensions close to our borders, we see tensions in Afghanistan we see unresolved situations there. We are ourselves subject of occupation by Armenia and this is a permanent source of threat, 20 percent of our territories are under Armenian occupation in violation of international norms and united Nations Security Council Resolutions. We see aggravation of tension with respect to US-Iranian relationship, and many other hotspots in the region which are already flaring our potential. Therefore, we are very interested in safety, security, and predictability beyond our borders, because even economic difficulties outside of Azerbaijan can influence our economic and social situation. Therefore, I think stability in the region is the main concern which we have, and instability in the region is the main nightmare if I may put it so.

President of the Republic of Azerbaijan Ilham Aliyev has attended a panel discussion on “Strategic Outlook: Eurasia” held as part of the World Economic Forum, APA reports. 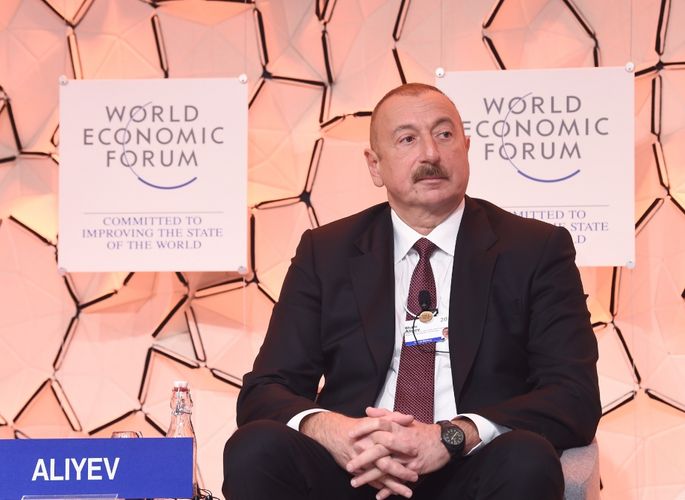 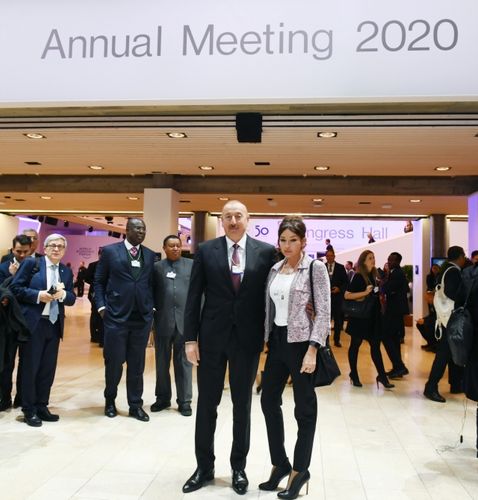 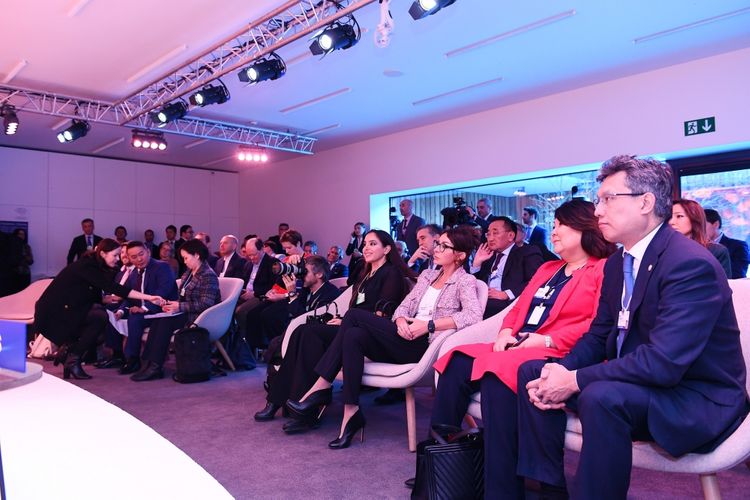 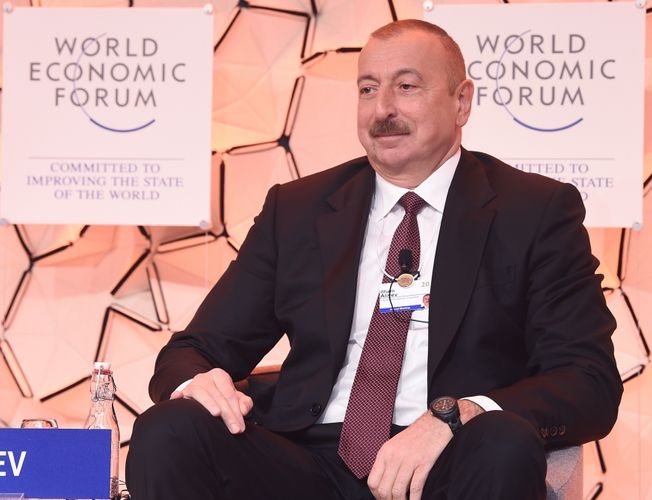 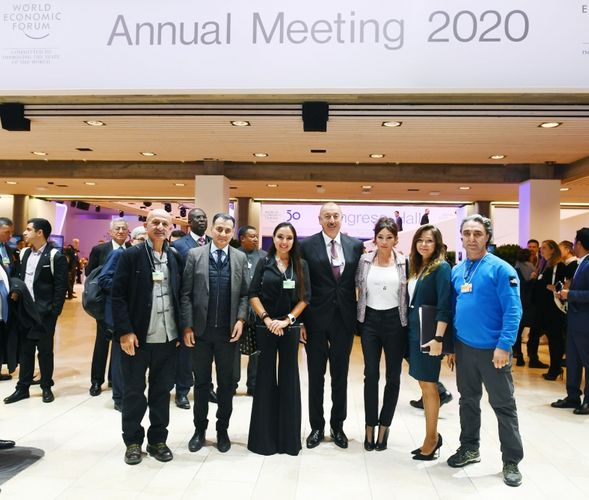 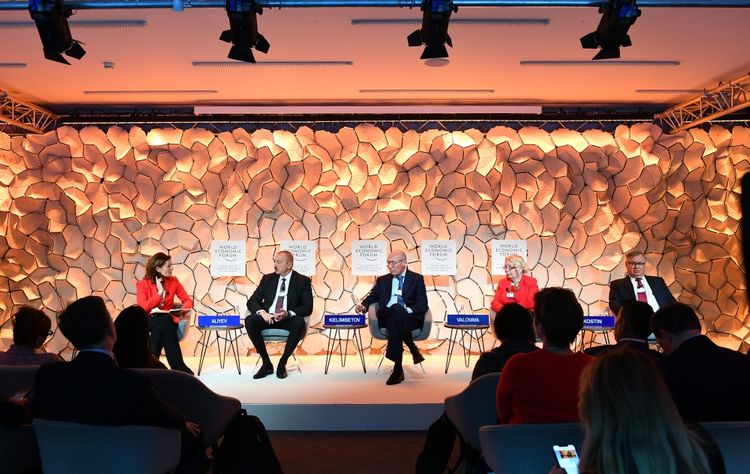 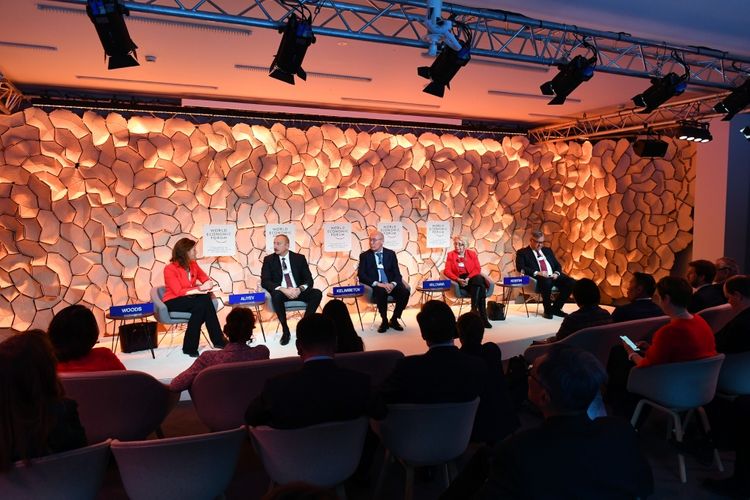