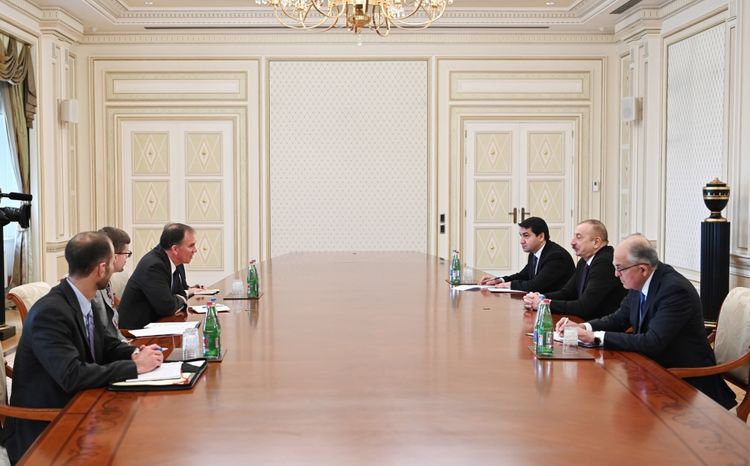 President of the Republic of Azerbaijan Ilham Aliyev has received a delegation led by US Deputy Assistant Secretary for Energy Diplomacy in the Department of State's Bureau of Energy Resources Kurt Donnelly, APA reports.

-Welcome. I am very pleased to see you.

Kurt Donnelly: We are also pleased to see you.

President Ilham Aliyev: Thank you for participating in the Ministerial Meeting of the Southern Gas Corridor Advisory Council. It has indeed become a good tradition. We review the results and plan on further work every year. Every year we observe very important implementation of the Southern Gas Corridor project, which is already nearing its final stage. I do hope that all work will be completed by the end of this year. As you know, we opened the project in stages. In 2018, we organized an official ceremony in Baku and announced the commissioning of the Southern Gas Corridor. Then, of course, a very important event related to TANAP took place. Last November, TANAP already reached the European border. This will allow us the opportunity to export more natural gas from Shah Deniz and other gas fields because we plan to expand our activities and increase the level of production from other fields that are still at the exploration stage or the final stage of development.

So all work is progressing on schedule. I would like to express my gratitude to the US Government for its continued support of this important project. I know that President Trump is personally involved in this process. His active contacts and participation have greatly helped us deal with certain difficulties we had previously encountered. At present, we do not see any other obstacles. The path ahead of us is very clear. I am sure that our fruitful cooperation will be continued in the future because the US government has always provided great support for our projects related both to the development of our oil and gas pipelines and the overall energy potential. You are welcome again!

US Deputy Assistant Secretary for Energy Diplomacy in the Department of State's Bureau of Energy Resources Kurt Donnelly said he made his first visit to Baku in 2004, emphasizing that he had eye-witnessed great development processes in the capital over the period. Touching upon the significance of the Southern Gas Corridor, Kurt Donnelly congratulated President Ilham Aliyev on this project entering the final phase. Kurt Donnelly hailed the importance of the upcoming sixth Ministerial Meeting of the Southern Gas Corridor Advisory Council and noted the significance of discussions in this format.

The sides also exchanged views on the development of alternative energy resources in Azerbaijan in recent years.