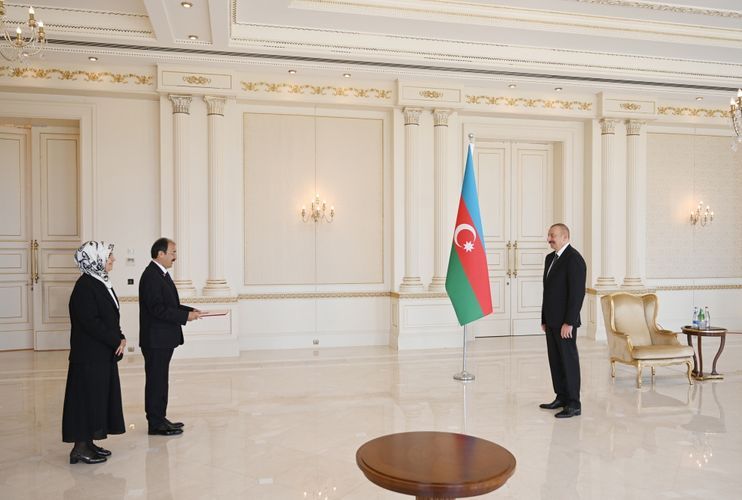 Then, speaking with the ambassador, President Ilham Aliyev said:

Turkish-Azerbaijani friendship and brotherhood are at the highest level today, and we are always with each other in all matters. The second Karabakh war once again showed the whole world that Turkey and Azerbaijan are together, and the support of my dear brother, esteemed President Recep Tayyip Erdogan, inspired us from the first hours. Because from the first hours of the war, Turkey and its President have given us moral and political support. This moral and political support was provided until the last day of the war. Our victory in the second Karabakh war, of course, created a new reality in the region. Turkey and Azerbaijan have expanded their capabilities in the region, and our role and influence have increased and will continue to grow. All our joint projects and initiatives play an important role in ensuring stability and peace in the region.

We can talk for hours about our relationship, you know all this well. At the heart of our relations are the brotherhood of our peoples and the political resolve of our leaders. Turkey and Azerbaijan, as two brotherly countries, will continue to support each other in all matters, stand by each other in all matters and continue their efforts to establish peace in the region where we live with tangible work and steps.

I am confident that you will make every effort to further develop these relations during your tenure. I wish you success. Welcome to Azerbaijan - your homeland!

- It is good to see you, Mr. President. First of all, thank you for receiving me. Greetings to Your Excellency and the First Lady.

Our President is sending his greetings and respects. Congratulations on your victory. Hopefully, during my tenure, I will strive to further develop and advance our relations. Thank you very much.

President of the Republic of Azerbaijan Ilham Aliyev has today received credentials of the newly appointed Ambassador Extraordinary and Plenipotentiary of the Republic of Turkey Cahit Bagci, APA reports citing Presidential press service.