President Ilham Aliyev: "We have a long strategy of reduction of the foreign direct debt" 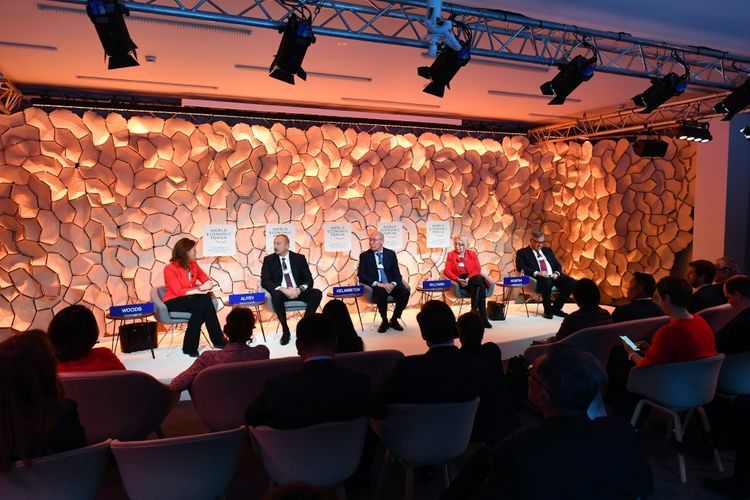 "I think that in the previous times we largely invested into infrastructure project, therefore, today, with respect to access to electricity, according again to Davos Forum, Azerbaijan is number 2. Gasification level in Azerbaijan is 96 percent, we have built 16 thousand kilometers of roads and more than 3000 schools and 700 hospitals. But that was part of the state investment," President of the Republic of Azerbaijan Ilham Aliyev has said while responding to moderator's questions at panel discussion on “Strategic Outlook: Eurasia” held as part of the World Economic Forum in Davos, APA reports.

"What we need now, we need new approach in the governance, good governance, transparency, accountability, bringing the criteria of our life and living standards closer to the standards of European Union. And I think this is possible, this is achievable, because we have a strong political support. Again I want to come to the assessment of Davos Forum which ranks Azerbaijani government's strategic vision as number 10 and government’s ability to provide stability number 11 in the world. So, the new government will concentrate on major challenge, which is growing population. Therefore, our economic growth must be in line with growth of population. During the time of independence we came from seven million to ten million people. So, it needs additional infrastructure. It needs additional food supply, and our population grows every year more than hundred thousand that means we need at least hundred thousand jobs, annually and it is not easy. Therefore, the government will address that. We will try to keep poverty as low as it is today, it is below 5 percent. And also we have a long strategy of reduction of the foreign direct debt, which is today very low, it is 17 percent of GDP but our target is to bring it down to 10 percent of GDP. And of course, keeping inflation low, as it was last year 2.5 percent, and income of people must always be ahead of inflation as well as job creation must be ahead of demographic growth," the head of state said.